Since 2018, we have been organising training sessions on the rehabilitation of cervical dystonia and function (writer’s cramp) given by Dr. Jean-Pierre Bleton, in the regions, in person, by communicating with local medical professionals and their federations or health care institutions.

We wanted to organise a session for the Paris area and Dr. Bleton had the idea of a new teaching formula, i.e., a live demonstration of a multidisciplinary consultation between neurologists and physiotherapists.

We decided on a giant training session, in person and by videoconference, both in French and English and reserved for medical professionals.

We used the services of Invivox, a medical e-learning company, which was responsible for the organisation, communication and management of registrations, Unik Production for the image and sound technology, and Global Interpreting for the instantaneous translation from French into English. These technical costs were covered by the sponsorship of Ipsen Pharma France. I congratulate the professionalism of these providers. 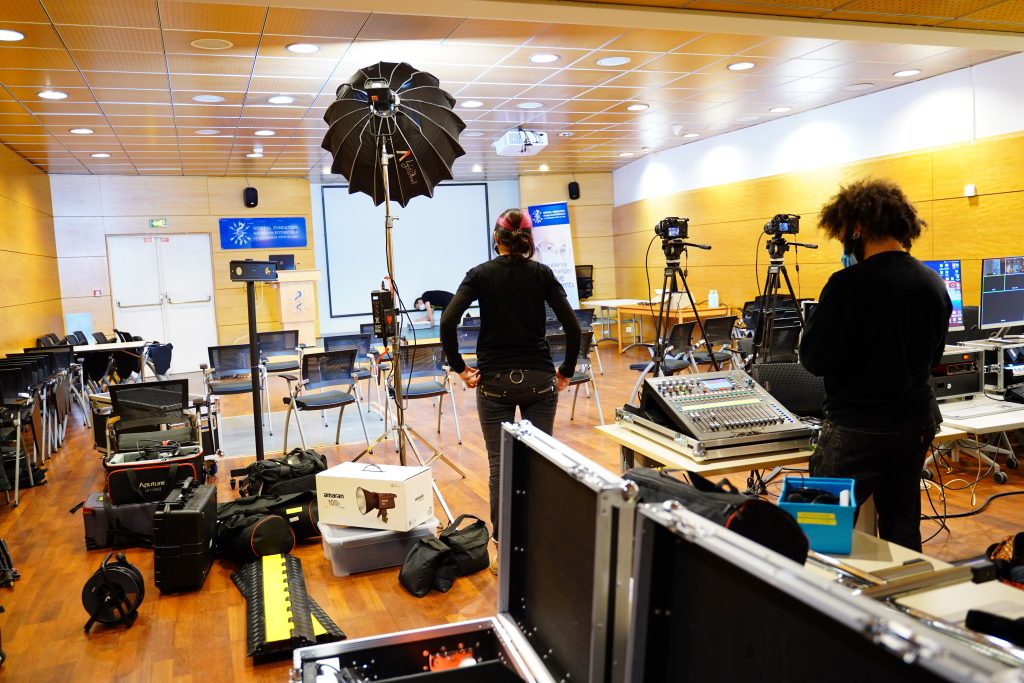 The technique, overview of the equipment

Medical professionals from all over France and Europe were able to follow the afternoon by videoconference and interact with the speakers. We had 180 registrations for the Visio and 30 lucky participants in the conference room, limited by the “white plan” in hospitals the day before, because of the 5th wave. Many more registered to access the recording later.

Indeed, a “replay” will be available for one year on the Invivox Internet platform, and permanently on the AMADYS Internet site, professional access. Thus, any specialist interested in perfecting the management of cervical dystonia and function, will be able to view this training without waiting for a future organisation.

The video in English will also be made available to Dystonia Europe for English speaking specialists.

This operation represents a precious support among our tools, which will be able to preserve the demonstration of the “Bleton method” and of a multidisciplinary consultation.

In the morning, we set up in the conference room of the Foundation Adolphe de Rothschild hospital, Paris, which  I would like to thank for agreeing to host this training.

The equipment deployed by the technicians was impressive: numerous cases, a long table of consoles, screens, wires everywhere, cameras, projectors… connection tests, too, with the translators connected to the Visio in Zoom. On the spot, we set up the chairs, the position of the speakers, reviewed our script and our organisation.

A quick lunch tray and the show was about to start. I jumped up to the lectern just before the countdown of the technicians (very intimidating, we are not actors) and 10/9/8…. 3/2/1, hand signal, go! The live session and recording were on!

The afternoon was divided into three successive groups: two on cervical dystonia with three patients each, one with two patients on writer’s cramp, after an introduction by me for a presentation of AMADYS and Dystonia Europe, and then by Dr. Christophe Vial. Study of a cramp case by ultrasound

Questions from the professional audience were addressed at the end of each group.

The speakers exchanged on the different forms of cervical dystonia and their therapeutic proposals. They used the ultrasound to show the muscles involved and Jean-Pierre Bleton demonstrated after explanations and rehabilitation exercises.

The ‘crampers’ were set up at the edge of a table to  allow for writing tests. The cameramen took close-ups, while the speakers were equipped with tie mics behind their surgical masks. 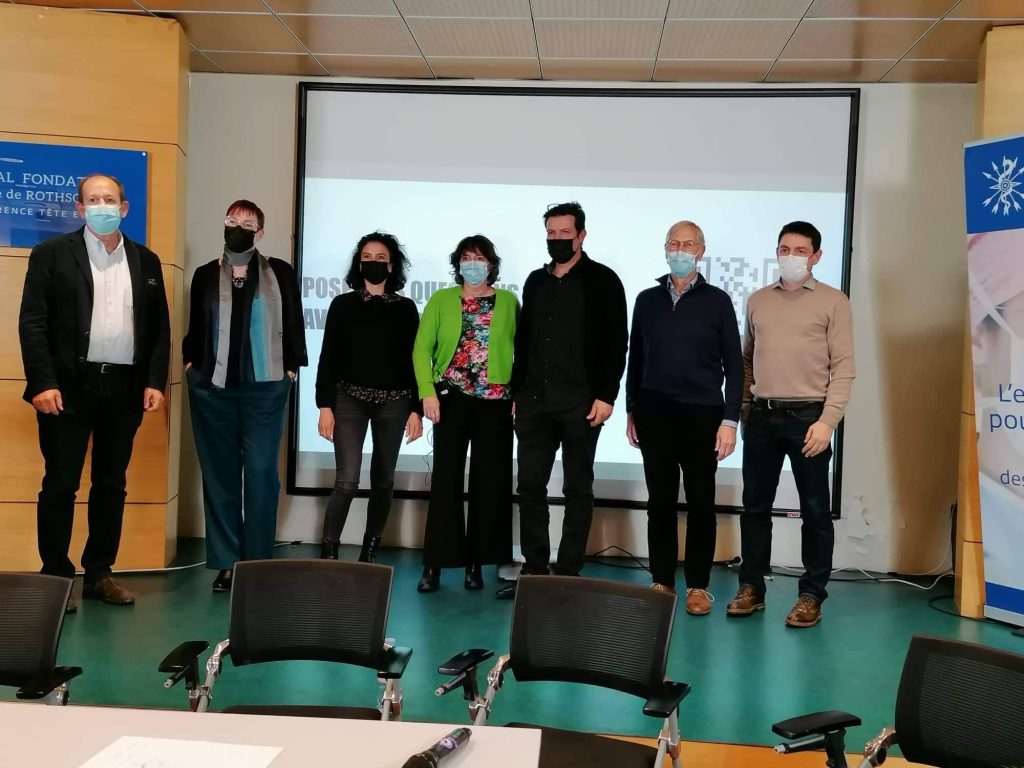 During this interlude, a beautiful video was projected for the participants in Visio, representing a mix of the actions and colours of AMADYS and Dystonia Europe.

We ended the day outside the hospital, among speakers and supporters, for a welcome aperitif. We were joined by Dr Célia Rech, member of our Scientific Committee, and Vincent d’Hardemare, neurosurgeon, Breughel laureate (Amadys Research Award).

We were happy and satisfied with our work. The transfer of knowledge between specialists is essential for the good care of patients, and this action echoes the purpose of our organization’s statutes.

AMADYS and the members or sympathizers of its Scientific Committee can be proud of this friendly collaboration and of such a production, in the interest of the patients.

We hope to be able to organise other actions of this type in the future for other forms of dystonia.

We would like to thank Ipsen Pharma for having made this event possible and for supporting the cause of dystonia, AMADYS and its actions.

It was interesting to understand, for example, that in the case of cervical dystonia, rehabilitation complements botulinum toxin injections,  but for  writer’s cramp, it is rehabilitation that points out the abnormalities and injections that supplement them, to help better recovery through exercise.Sitting at a table, Dr. Vial took down the questions of the participants in Visio and passed the microphone around the room. While I kept an eye on the timer, we had planned for 20 minutes per patient, and I handed out countdown signs to the speakers so that they could adjust their speech.

We had a well-deserved 20-minute break between the cervical dystonia and writer’s cramp groups. It was a long afternoon of recording for the speakers, staying focused on both the patients and the technique as everything went on. PS: for confidentiality and respect of the volunteers’ patients, AMADYS and Dystonia Europe will not broadcast their image. The replay and the training will only be accessible to medical professionals.