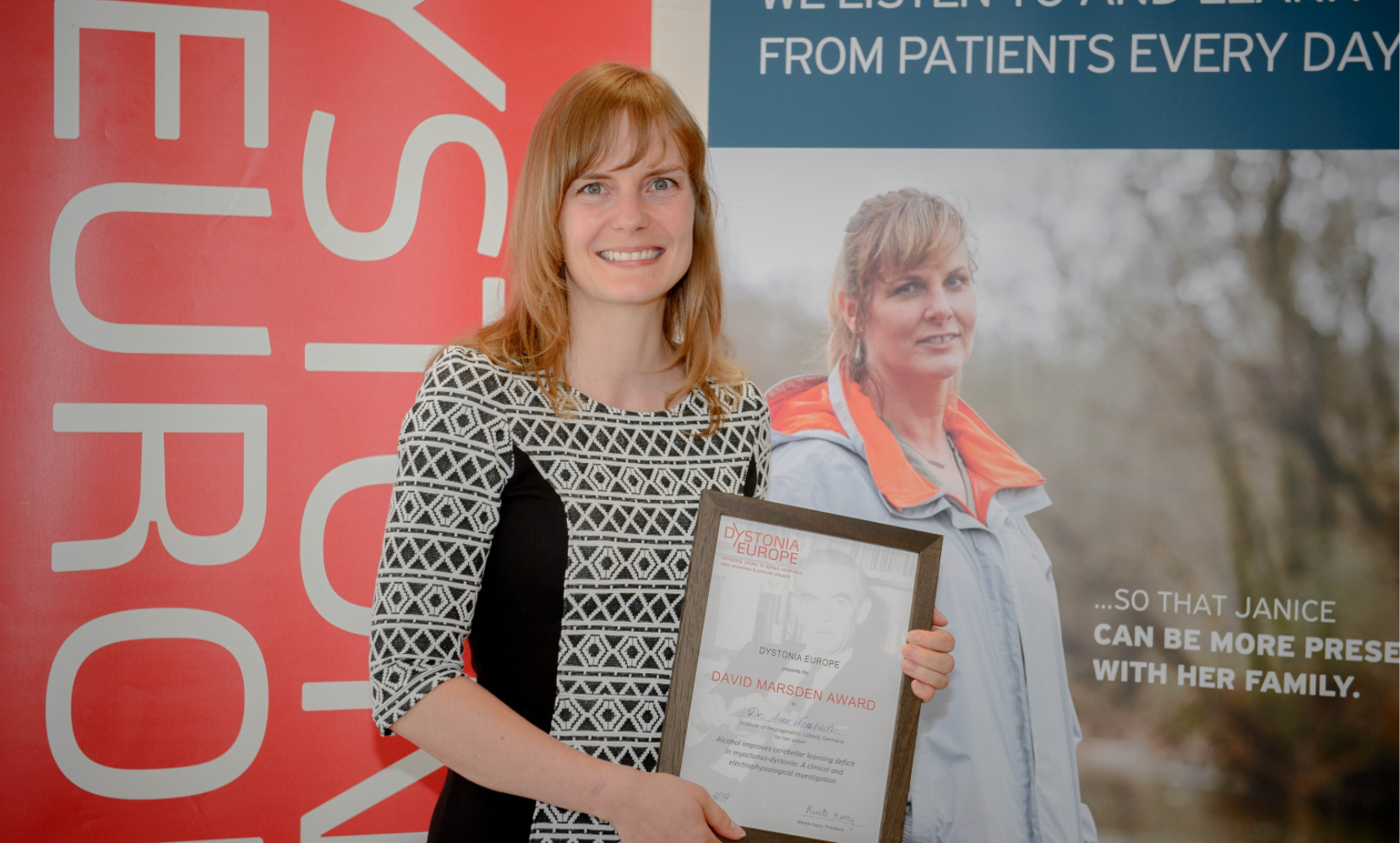 The award was introduced by Dystonia Europe in 2003 and is presented every two years to stimulate research on dystonia, especially by young scientists in Europe.

Professor David Marsden (1938 – 1998) was one of the leading neurologists in Europe and DE wishes to honor the enormous part he played in developing knowledge of and interest in dystonia.

The David Marsden Award 2019 was awarded to Dr. Anne Weissbach for her paper: “Alcohol improves cerebellar learning deficit in myoclonus-dystonia: A clinical and electrophysiological investigation”

Dr. Weissbach was presented with the award by Dystonia Europe President Merete Avery at the Dystonia-Days 2019 held in London 5th July. Dr Weissbach expressed her thanks to DE and Ipsen for the award and then presented the work of her research.

About the winner
Dr. Weissbach is a neurologist and clinician-scientist in Prof Christine Klein’s team at the Institute of Neurogenetics in Lübeck. She studied Medicine at the University of Lübeck and finished her residency in Neurology at the Clinic of Neurology at the University Clinic Schleswig-Holstein. During her scientific education, she was trained in transcranial magnetic stimulation and blink reflex conditioning at the research laboratory of Prof. Robert Chen and Prof. Anthony Lang in Toronto, Canada and the Neuroscience Section of Prof. Münchau and Prof. Bäumer at the Institute of Neurogenetics in Lübeck, Germany.

About the research
Currently, the pathophysiology of dystonia is still largely unknown, thereby impeding the development of causal treatment options. In recent years, growing evidence has emerged, pointing towards the concept of dystonia as a network disorder and emphasizing the specific importance of subcortical nodes, including the cerebellum in the pathogenesis of a subgroup of dystonias.  The lack of a clear understanding of the defective subcortical neural basis of dystonia and its possible modulation is, at least partly, explained by a paucity of neuropathologically delineated disease mechanisms. However, for myoclonus-dystonia (M-D) due to mutations in the epsilon-sacoglycan(SGCE) gene several important clues have emerged: At the molecular level, SGCE is highly expressed in gamma-aminobutyric acid (GABA)-ergic synapses of the cerebellum and additionally structural, functional and metabolic studies suggested cerebellar abnormalities in these patients.

Through our work we were able to establish an in vivomodel for a cerebellar deficit in dystonia, in which mutations in the SGCE gene cause a GABAergic deficit due to Purkinje cell dysfunction resulting in a disinhibition of classical eyeblink conditioning pathways that were temporarily compensated for by acute GABAergic substitution by alcohol intake. The combination of our findings suggests a crucial role of cerebellar networks in the generation of symptoms in these patients and will serve as a model opening up new avenues for the development of novel pathophysiological concepts and treatment strategies in dystonia.

The award is generously sponsored by: