On Sept.25th A.R.D. organized the Second Italian National Dystonia Day; it was an online event, shared by our social media, as it had been in 2020. Last year Prof. Albanese had launched an ambitious project concerning musicians: a survey in Italian Music Academies, Schools and Conservatories in order to know whether students are informed about dystonia  and how many of them are now facing its symptoms. This survey is the first ever carried out in Italy about this topic and Dr. Anna Castagna presented the first results: 23% of the participants are singers, 15% play guitar and minor percentages play other instruments; 48% declared that they don’t know what dystonia is, 20% maybe know and only the remaining 32% are informed about the disease. The aim of this survey is to have a picture of the connections between music and dystonia, in order to inform and take action before the artists are compelled to change their professional career. The survey is being carried out until December 31st. The hashtag of this day was “Ogni passo conta” which means  “any step is valuable”: this year we focused on 5 stories of patients who could fulfil their life and achieve their desires step by step, in spite of dystonia.

Our first story was from Vera Issel, a young musician with hand dystonia who took part in Dystonia Europe Dystonia Day on September 4th. 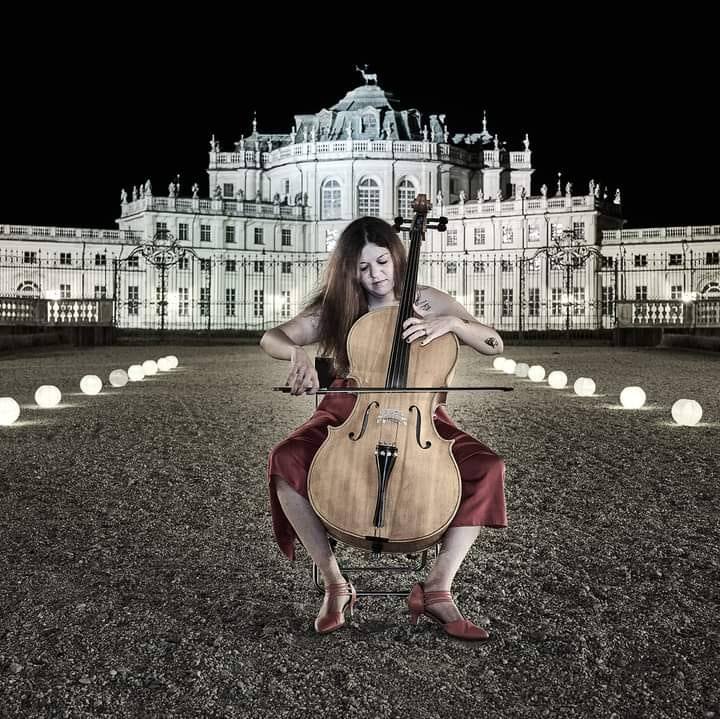 As a young girl, she played bowed instruments (violin, viola, cello) but in 2010 she had to stop due to her hand problems which her teachers did not acknowledge, blaming her as “not a good player”. Two years ago she began a new therapy and is now playing cello again, using 3 fingers of her left hand.  She has realized that improvising music is better than reading it on the score: when free to play as she wants, her hand obeys and allows  her to express her love for music. She played 3 short pieces for us on her cello. Now her aim is giving voice to people considered as ‘outcasts’ or ‘different’ through her music, being a spokesperson for those who could not speak or were not heard. That’s why she plays in prisons, former mental hospitals and former concentration camps.

Then Giuseppe Grossi presented his story: he loves running and taking part in marathons, but some years ago he began to have problems in his right leg and did not have full  control of it. 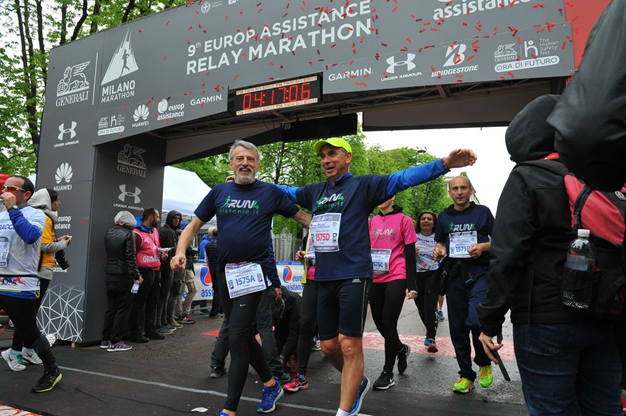 After a very long period of therapies he has been able to walk and run again. Two years ago, in the A.R.D. team, he ran a relay race  organized by Charity Program, a great solidarity project created and supported by Milano Marathon which allows people to run for a non-profit association, helping it to collect funds. Since then, he keeps running but now he prefers running on compact earth or grass paths, rather than on concrete roads as he feels that his leg works better on off-track paths.

A paralympic athlete (winner of 3 bronze medals in Tokyo this year) was our 3rd speaker: Monica Boggioni, aged 23. 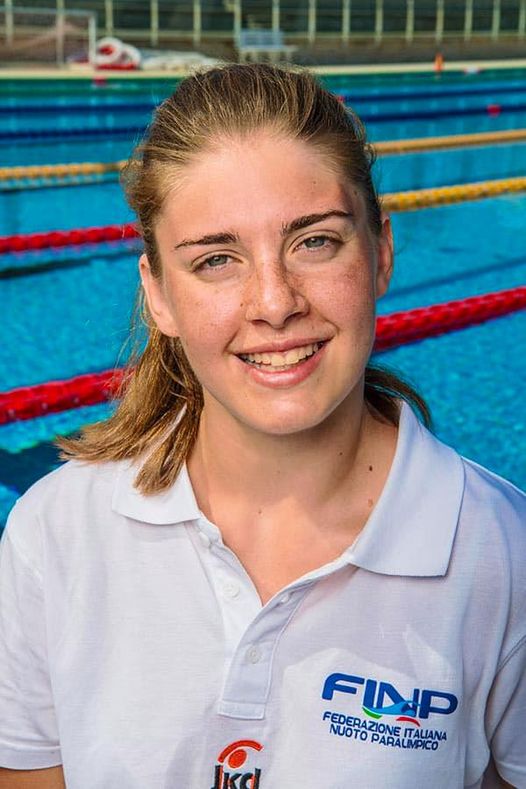 She cannot walk due to paralysis in her legs, and when a baby she began to swim as a therapy. Water gave her a sense of freedom and she was in her element. She decided that she wanted to participate in competitions but when 17 she developed an arm dystonia too. In spite of this, in 2017 she joined the Italian National team for international competitions: since then she has achieved 3 European records and 3 world records, winning many medals. In the Tokyo Paralympic Games she won 3 bronze medals, in 100m freestyle, 200m freestyle and 200m medley. Monica is now attending Biotechnologies courses at the University of Pavia and wants to specialize in medical genetics, in order to find cures for scarcely examined pathologies.

Since 2018  A.R.D. has  awarded 2 prizes “Best study about dystonia by young doctors” (each of €2000) on the occasion of the annual congress of the Movement Disorders Society (LIMPE-DISMOV). We introduced Dr. Monfrini and Dr. Carbone who last year won the A.R.D. awards during the 6th Annual Congress of LIMPE DISMOV.

Dr. Edoardo Monfrini (aged 31) works in Fondazione Ca’Granda, Ospedale Maggiore Policlinico in Milan. He told us about his work: “A mutation in a novel lysosomal gene causes adult-onset generalized dystonia in an Italian patient” This study shows that the identified gene mutation causes some forms of hereditary dystonia.

Dr. Federico Carbone who works in the Neurological Department of the Medical University in  Innsbruck, Austria, illustrated his work “Impaired inhibitory control of saccadic eye movements in cervical dystonia: an eye tracking study”  A saccade is a rapid eye movement; this  study shows that  patients with cervical dystonia may have a scarce or reduced control of saccades, probably due to a dysfunction of the corticobasal network.

We think that it’s very important to foster research and stimulate young doctors to develop knowledge and interest in our disease; these awards may be a good way of encouraging them.

Our 4th story was from Carlo Iacomucci, a painter and drawer with focal hand dystonia. 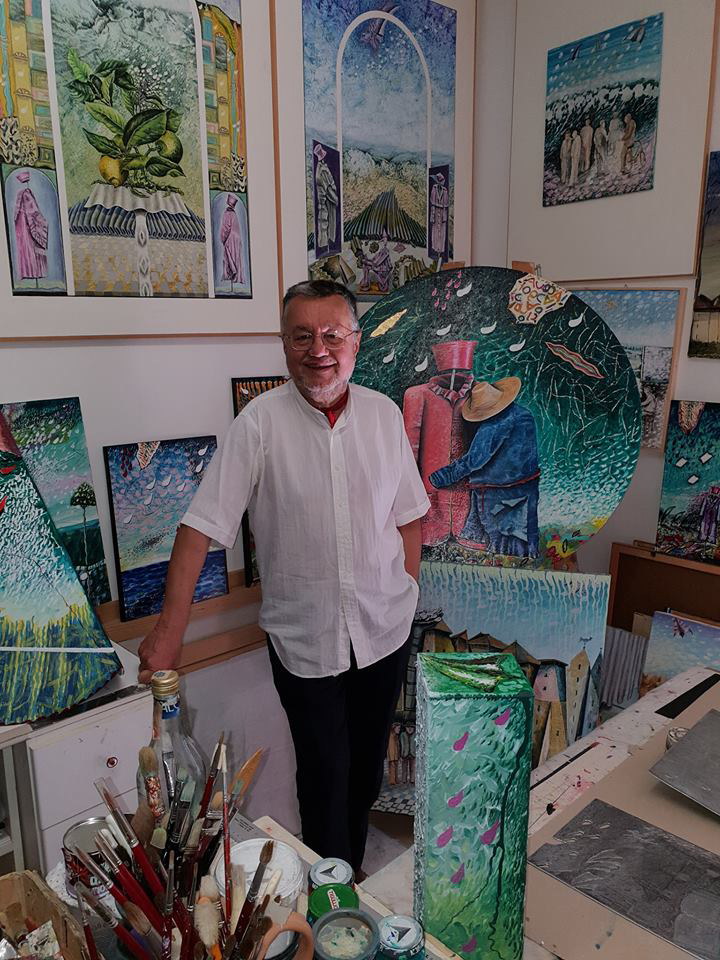 He began to draw at the age of 13 years and to paint and engrave at 22, he has been a professor of painting disciplines for 36 years. In 2004 he began to feel a strong unbearable heat in his right hand, he could not hold his brush or chisel very well and eventually had the diagnosis of “task specific focal dystonia”. He began with botulinum toxin injections and was recommended by his doctors to exercise and re-educate his hand by writing and drawing in a note-book. He wrote many pages copying texts about the graphical techniques he used (xylographs, etchings with acid, aquatints, etc) adding his drawings on each page. His exercise pages were collected in a book issued in 2019 with a revealing title “The rebel hand”; it is composed of 40 drawings made with graphic pens, stamp punches and graphite shades. Mr. Iacomucci has developed a peculiar sensory trick, he touches his right middle finger with his left middle finger, so as to avoid involuntary movements and be able to grip his brush or pen. Many books about dystonia have been published up to now, but usually they deal with stories of people with the disease. In Italy this is the first and only book with drawings by a dystonic hand and we thank Mr. Iacomucci who shows us how to take back possession of a “rebel hand”.

Our last speaker was Erika Alaimo, a young lady who had many medical problems as a child (she had 2 cerebral hemorrhages with hemiparesis due to a cerebral angioma which was later burnt; when 16 she got a diagnosis of hand and arm dystonia). Her childhood and teens were very difficult at school and outside because she felt discriminated by other boys and girls, who made fun of her dystonia. A total change happened when she began University: using botulinum toxin and medicines her dystonia was less severe and she began to have friends. Now she is working as a teacher for students with disabilities, this satisfies her desire to help children who are now facing the problems she experienced herself.  While telling us her story, her boyfriend was beside her, and she concluded that now she is really happy, smiling to her love. 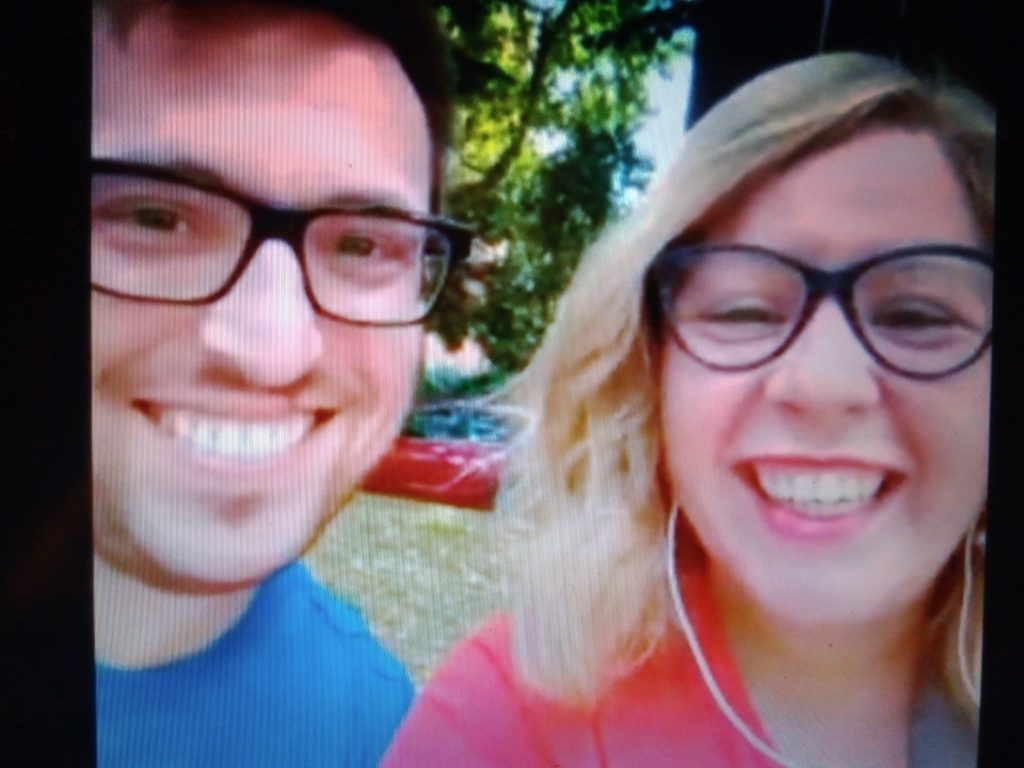 We had 2 sessions dedicated to Q&A as we had received a large quantity of questions; Dr. Francesca Morgante and Dr. Nardo Nardocci answered many of them but it was impossible to reply to them all. Dr. Morgante promised a specific webinar dedicated to the questions which could not be answered. As for the doubts about dystonia and the COVID vaccine, the doctors clarified that up to now a lot of patients have been vaccinated, without side effects; COVID may be much more dangerous in dystonia patients who are not vaccinated.

At 1,30 pm, after 3 and a half hours without breaks, we ended our live broadcast. We have received thanks and compliments for this successful event and we are already thinking of our next Dystonia Day next year, when A.R.D. will celebrate its 30th anniversary.