Results of EFNA’s Survey on Stigma and Neurological Disorder

In celebration of World Brain Day 2020, the European Federation of Neurological Associations (EFNA) has published the results of its recent survey on stigma and neurological disorder.

According to the World Health Organisation, stigma   is a major cause of discrimination and exclusion:
it affects people‘s self-esteem, helps disrupt their   family relationships and limits their ability to socialise and obtain housing and jobs. EFNA has chosen to examine the stigma suffered by those with neuro-logical disorders by commissioning this survey into its causes and effects.

1373 responses to the survey were received from 37 countries. Responses came from a diverse range of neurological conditions, with the greatest numbers coming from the areas of Myalgic Encephalomyelitis (ME), dystonia, migraine or headache and chronic pain.

92% of respondents report feeling affected by stigma on account of the neurological disorder they live with. Lack of understanding is seen as the biggest cause of this, followed by myths/misconceptions about these disorders and their invisible nature.

Stigma is also prevalent within families and in social situations. 49% say their families sometimes make them feel that they exaggerate their condition and, sadly, 32% of respondents with children have been made to feel that they are inadequate parents. Almost half of respondents who lived with a neurological disorder during childhood found it difficult to make friends or maintain friendships at school, and a similar number were excluded from school events on account of their condition.

“We hope that EFNA, together with our member organisations, can use these findings to work to develop strategies that will combat stigma where it arises, thereby improving the quality of life of people living with neurological disorder”.

The report contains overall results, disease-specific results and a comparison of disease areas. The complete findings of the survey are available from EFNA’s website at https://www.efna.net/survey2020 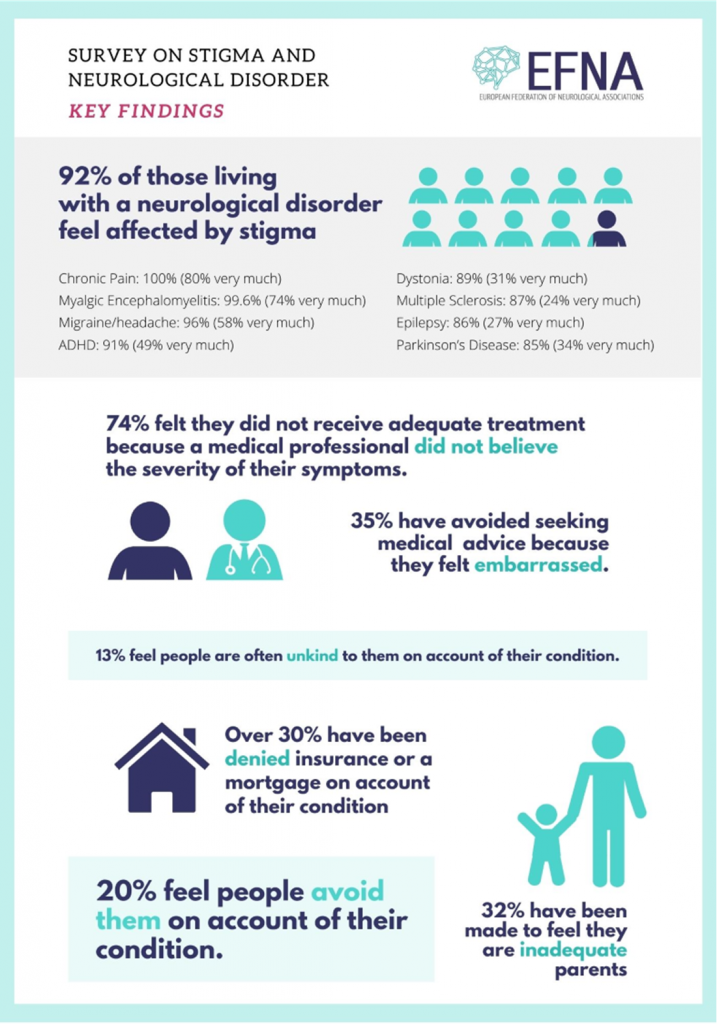