The #BrainLifeGoals campaign is an initiative of the European Federation of Neurological Associations (EFNA) that aims to raise awareness of the impact of neurological disorders.

EFNA started an initiative #BrainLifeGoals Project Grant last year, to support work on one of the EFNA’s advocacy themes. In 2019, in support of this campaign, EFNA awarded grants of €2,500 each, to projects that aimed to raise awareness and improve understanding of neurological disorders.

The focus for 2020 was on: Ensuring Equitable Access to Treatment, Services and Support for Neurology   Patients and their Carers. Access to treatment is one of the central #BrainLifeGoals of many neurology   patients. To help make that a reality across Europe, this year EFNA provided 10 grants of €3,000 each to selected organisations, working to address this theme. EFNA received 26 applications from across Europe and 10 projects received a #BrainLifeGoals Grant in 2020.

Dystonia Europe´s project “Jump for Dystonia” was one of the 10 who won #BrainLifeGoals Project Grant in 2020.

Dystonia Europe first launched the “Jump for Dystonia” campaign in 2015. The successful dystonia awareness campaign that involved thousands of people worldwide is  relaunched this year. The first edition of Jump for Dystonia focused on making dystonia better known and more heard of. People from all continents submitted all together more than 10 000 Jump photos.

For the 2020 edition, Jump for Dystonia will be taken to a new level. The messages on dystonia will be    extended in order to increase the awareness of dys-tonia and therefore help to speed up diagnosis and access to treatment to reach a better quality of life for dystonia patients.

A recent dystonia survey in Europe, with over 3000 participants, shows that over 40 % of dystonia

patients waited between 3-10 years before correct diagnosis. There is an urgent need to improve knowledge of dystonia among the public and the medical profession in order to improve access to treatment for dystonia patients across Europe. This can be done by talking about it and JUMPING for it!

The current situation in the world fosters digital projects and an online campaign can have much greater results. We therefore present Jump for dystonia with a new twist! There are many types of dystonias and that’s why we will have several styles of jumpers.

Also, not everyone has the possibility of jumping.  These types will allow the involvement of people with limited mobility.

You can read more about all the winners on EFNA’s website  https://www.efna.net/winners-of-efnas-brainlifegoals-project-grants-announced/ –

We thank EFNA for the grant to support the relaunch the «Jump for Dystonia» Campaign. 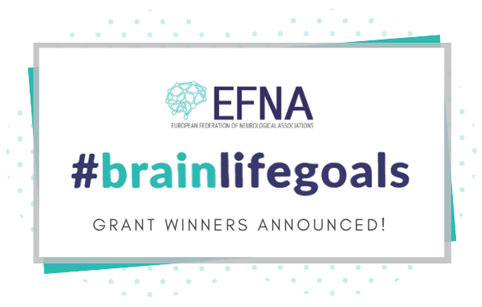