Participate in a Study by EFNA on Stigma and Neurological Conditions

During Awareness Week 2020 The European Federation of Neurological Associations (EFNA), launched a survey on Stigma and Neurological Conditions .

EFNA represents 20 European and International associations across a wide variety of neurological disease areas, such as multiple sclerosis, epilepsy, migraine, ADHD, Movement Disorders such as Dystonia and Parkinson’s, to mention just a few.

In 2018, EFNA conducted a survey of young people affected by a neurological disorder, to assess the impact of these conditions on their lives. Stigma was identified as one of the biggest issues affecting respondents, after access to medication/treatment and isolation.

As a result, EFNA has decided to develop a new survey, delving deeper into this issue, exploring the areas where stigma is felt and the situations which give rise to it.

By identifying these areas EFNA can focus attention where it is most required and move to develop strategies that will combat stigma.

Purpose of The Study

The purpose of this survey is to identify factors contributing to stigma against people living with neurological disorders in order to develop strategies that will help to combat it.

Stigma and discrimination occur when people are treated unfairly because they are seen as being different from others. This survey will explore how you have been affected by stigma due to living with a neurological disorder.

This survey is open to anyone who is living with a neurological disorder, resident in Europe. The survey is available in 8 languages and will remain open until June 15th 2020.

Stigma is very often a problem for people living with dystonia and ask that you participate in the survey. When the results from the survey is published we hope this can be used for more knowledge on Neurological diseases and how to fight Stigma. 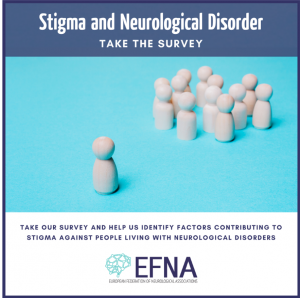