Last week of February Dystonia Europe attended the event ‘Brain Health as a Global Priority – Time for the EU to Act Now’ in the EU Parliament in Brussels.

The meeting was organized by EFNA – European Federation of Neurological Associations, in collaboration with EAN – European Academy of Neurology, and EBC – the European Brain Council.
MEP Jaroslaw Duda, from Poland, welcomed the 100 participants and said that “each one of us knows somebody who is affected by a brain disorder such as MS, Parkinsons, Epilepsy, and the brain’s health is crucial for progress”.

Presidents of EAN and EFNA: Prof Claudio Bassetti and Ms Joke Jaarsma welcomed the audience and then followed speakers who gave an update on the current situation regarding neurology in Europe from different perspectives such as the patient’s and the researchers’ as well as from some of the EU institutions.

Dr. Anette Storstein, Head of the Board of the Nor-wegian Brain Council, shared work on the brain plan in Norway. She concluded “there is no health without brain health”.

A very emotional presentation was the one from Dr. Francesca Sofia, member of the European Regional Executive Committee of the International Bureau of Epilepsy. She shared what it’s like when your daughter is affected by a rare form of epilepsy. “We all have an inner force that we can use to make changes. I am not alone – I share this destiny with millions of others and I have the responsibility to make my voice heard to help others”, she said.

Ms Nina Renshaw, Director of Policy and Advocacy at the NCD – Non Communicable Disease Alliance, shared facts about research investments in different disease groups. There are 300 times more investment in other disease areas compared to neurology.

MEPs Tilly Metz and Miriam Dalli promised their full support in the continued work to make brain health a priority.

The Call to Action from today’s meeting is:

A full report and all presentations are available at the EFNA website https://www.efna.net/brain-health-as-a-global-priority-time-for-the-eu-to-act-now-2/

On the same day, a few floors up in the EU parliament building, EURORDIS organised the event “Bigger than Life” an exhibition by artist Phil L. Herold’s on the occasion of the Rare Disease Day 2020, co-hosted by MEP Tomislav Sokol, MEP Loucas Fourlas and MEP Stelios Kympouropoulos.

In the afternoon EFNA organised a workshop with invited participants to begin planning an advocacy strategy for neurology, work which will continue throughout 2020.

The last day of this busy week in Brussels the first EFNA board meeting of the year took place. The group discussed the strategy for the next 5 years as well as this year’s projects and activities. Next time we meet will be at the EAN Congress in Paris in May, for the EFNA General Assembly and other members’ activities. *

For Dystonia Europe it is important to take part in this European collaboration between neurology patient associations. Together we are stronger and can make the voice of neurology patients better heard.

*Due to the Covid-19 pandemic EFNA General Assembly and other meetings will be held on-line. 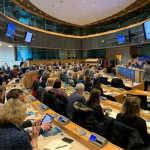 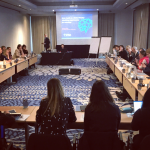 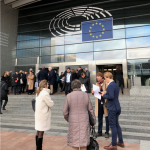 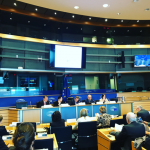