Dystonia is a distinct movement disorder, a clinical entity determined by genetic and environmental factors. However, dystonia is commonly found as a disabling symptom of Parkinson’s disease. Indeed, up to 30% of Parkinson’s patients can exhibit dystonia as a presenting symptom, or even as a motor complication during the course of the disease. Since 2014, the the Michael J. Fox Foundation for Parkinson’s Research (MJFF) established a collaboration with the Bachmann-Strauss Dystonia and Parkinson Foundation, an US-based organization, whose co-founder, Bonnie Strauss helped funding several scientific activities along the past decades. Last November 16, 2019, in New York City, the MJFF awarded with the The fifth annual Bachmann-Strauss Prize for Excellence in Dystonia Research two clinician scientists, Prof. Antonio Pisani, MD, PhD, Professor of neurology at the University of Rome “Tor Vergata”, Italy, and Prof. David G. Standaert, David G. Standaert, MD, PhD, Professor and chairman of neurology at The University of Alabama at Birmingham, USA.

Pisani and Standaert have been working together for the past 15 years, publishing the first evidence of their scientific results in 2006. Since then, the have published about 10 articles on the pathophysiology of dystonia. Their work examined the role of different neurotransmitter activity in dystonia, in particular relationship between dopamine and acetylcholine, two major neurochemicals involved in synaptic transmission in the basal ganglia.

Both Pisani and Standaert are also practicing clinicians, therefore their research has a profound traslational approach, trying to translate their findings from the bench at the bedside and viceversa.

The award will allow them to continue their productive collaboration, with the aim to further advance our understanding in the pathogenesis of dystonia, and therefore find a pharmacological therapy for all people suffering from dystonia. 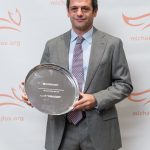 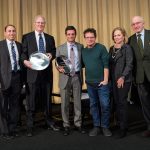