EBrains is working on building a shared digital brain research infrastructure for the EU. It started with the Human Brain Project  Human Brain Project, which goals are to interconnect computer science, medicine and neuroscience to accelerate the understanding of the human brain and its diseases, and to bring this knowledge to the benefits of patients and society.

To achieve this, the Human Brain Project has built EBRAINS – the world’s first integrated ICT infrastructure for brain research and development.

EBrains invited scientists, patient organisation representatives, IT specialists involved in the project and other specialists to their second meeting that took place in Brussels 9. and 10. December 2019. Dystonia Europe was invited and attended the meeting, were patients along with all the other participants could voice their opinion.

EBrains have mapped the brain by imaging, based upon the most average brain. The project is funded by the European Union.

One of the future aims is to make a tool for researchers to click in any area of the images of the brain to access what functions these areas controls in the body, mind etc. And later maybe add in the program which diseases could affect this area of the brain. Example: dystonia is known to origin in the basal ganglia, but it is also suspected or known that the cortex and maybe other areas of the brain have an impact in dystonia.

When a researcher click on an area of the images of the brain in EBRAINS the goal is that all ongoing studies will be visible and a researcher can opt in to possibly collaborate in a ongoing study. The set up of Ebrains is planned to be carried out over a time period of 3 yrs. starting in 2020. 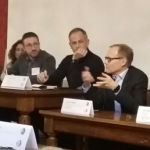 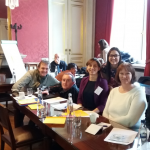