Advocating for Access to Neurology Treatment, Services and Supports

As part of Training Initiatives for Neurology Advocates [TINA], European Federation of Neurological Associations [EFNA] coordinated a meeting in Poland.

This workshop took place Monday 28th and Tuesday 29th October 2019 in Warsaw and gave participants the opportunity to discuss specific access challenges in their countries/disease areas and reach consensus on the main barriers to equitable access to neurology treatment in Europe. The event was attended by lecturers and patient representatives – 60 participants, 21 nationalities, 15 disease areas. The group included representatives of EFNAs stakeholders: EAN, EPF, ECB and many more, also industrial representatives.

Day 1 began with welcome from Joke Jaarsma, president of EFNA, who introduced the organization and its Brain Life Goals campaign. Donna Walsh, EFNA executive director explained the purpose of the workshop. Donna pointed out that EFNA is an organization of associations on European level and such events give the opportunity to see a perspective at the national level. This event is also intended to help prepare the future EFNA strategy.

Dr. David Charles, GAfPAs founder talked about the lack of awareness, barriers to: diagnosis, access to care providers, medications, clinical trials, neurologists and the entire care team. Dr. Charles emphasized that the role of patients and the patient’s cooperation with the care team is very important in the treatment process.

The next presentation took place via a teleconference connection. Frederic Destrebecq, Executive Director, EBC – European Brain Council presented the ECB’s activities focussing on the organization’s work on access to treatment. Frederic spoke about the high social costs of brain disorders on a European scale – 798 billion per year. EBC identified that the need for research is one of the biggest challenges. ECB initiated the Value of Treatment [VoT] project in January 2016. The VoT Research Project ultimately provide evidence-based and cost-effective policy recommendations for the adoption and implementation of a more patient-centred and sustainable coordinated care model for brain disorders.  Like the EFNA, the ECB is a pan-European organization that needs to know the voice of associations working at national level. Creating Brain Plans for individual countries is a very important element in order to work effectively to improve the situation.

At the end of the lecturers’ part, the event participants could ask questions to the speakers. One of the questions was addressed to the Executive Director of the EBC.  ‘Why only selected neurological diseases were analysed for the VoT project.’

Frederic replied that in the first stages nine neurological diseases were selected but the ECB has the door open for future cooperation with organizations representing other areas.

After a coffee break, the participants returned for an interactive exercise. Participants were divided into 6 groups to discuss specific access challenges in their countries/disease areas and reach consensus on the main barriers to equitable access to neurology treatment in Europe – now and in the future. Long diagnosis period, lack of reimbursement for treatment, lack of awareness and specialists, lack of information for patients about trials, lack of research or incorrect location of funds in research, lack of support from care givers, lack of access to data for patient advocates, emigration of specialists from Eastern countries. This and many more barriers in access to treatment were found by workshop participants. Everyone agreed that the barriers are almost the same regardless of the area of neurological diseases.

The last part of the session was workshop feedback, followed by panel discussion with key stakeholders:

Prof. Vodusek said that it is very important to have one  narrative for the whole group of neurological diseases. Simplicity in communication with policy makers is the path to success. He also highlighted the importance of awareness among medical professions, data collection and patient – physician communication.

Stanimir Hasurdjiev surprised the audience by telling frankly what the realities are. Today, we have not enough specialists and this situation will not improve in the future. To find solutions to our problems we have to start thinking ‘outside the box’, he said. How can we use technology, e.g. in communication with specialists? More specialists is also not a solution, maybe a system reorganization is needed?

On the second day of the workshop focus moved more to Health Technology Assessment (HTA).

Health Technology Assessment (HTA) is “…a multidisciplinary process that summarises information about the medical, social, economic and ethical issues related to the use of a health technology in a systematic, transparent, unbiased, robust manner. Its aim is to inform the formulation of safe, effective health policies that are patient-focussed and seek to achieve best value.” (EUnetHTA, 2007)

“Generally speaking, HTA aims to inform decisions made in health systems about which health technologies are of most value and should be invested in. This determination of value is complex and must take policy and social context into account.” (European Patients’ Academy, 2016)

The session started with a welcome back from Joke Jaarsma, President of EFNA.

Brian Kennedy, GAfPA, explains the importance of patient involvement in the HTA process on the example of an innovative neurotoxin treatment method described as “life changing” by some migraine patients, which has been rejected for The National Health Service in the United Kingdom.

Krystallia Pantiri, Pharmerit International, talked about how patient involvement in the decision-making process looks like on the example of Germany, France and the UK.

Matteo Scarabelli, Patient Engagement Manager in HTA, EURORDIS, explained in a very simple and understandable way how patients can be practically involved in the HTA process.

Then Šarūnas Narbutas, President, Lithuanian Cancer Patient Coalition, presented the process of implementing the HTA reform in Lithuania. He emphasized that there is a lack of agencies specializing in HTA in some countries and that HTA training sessions dedicated to patient organizations are needed. Using the example of a cancer drug, he showed the importance of patient involvement in the drug implementation process.

Magdalena Władysiuk, Vice President, HTA Consulting – TBC, presented how the Polish healthcare system works. Based on her 20 years of experience, she said how little time in the entire HTA process is dedicated to patient involvement. There is a lack of legal regulations of patient’s involvement in HTA in Poland, but the informal role of patients has increased over the past 5 years.

After listening to all presenters, participants divided into 5 groups and started an interactive exercise ‘Creating a Map for Neurology Patient Engagement in the Medicines Lifecycle, along the road to Access.’

After hearing feedback from groups and conclusions, Donna Walsh emphasized that all learnings from this workshop will be encapsulated in a report and subsequent advocacy tool, created by colleagues at the European Alliance for Patient Access with whom EFNA collaborate on this event.

The meeting was closed by the president of EFNA, who thanked  Danuta Lis (President of the Huntington Disease  Association) for her great support in organising this event in Poland. 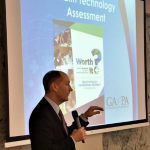 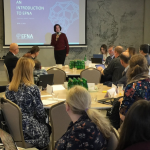 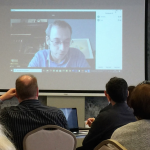 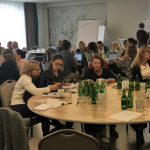