The first meeting was in Brussels in March 2019, and you can read more about the meeting in the DE Newsletter 1, 2019.  The participants were leaders from countries throughout Europe, to mention some, Malta, Iceland, Spain, Bulgaria, Croatia, Serbia, Norway, Portugal, Poland.

At the first face-to-face meeting in Brussels we did both exercises in small groups and one on one . These exercises were geared to open up and see things from different perspectives than other training in leadership that I have attended.

After the first meeting in Brussels we had monthly one on one coaching sessions by Skype. These calls focused on areas that we as leaders felt were challenging or could be improved.

Then after the monthly coaching sessions it was time for the final face to face meeting in Sophia Bulgaria. Before the last coaching session each participant had prepared a presentation on the project they had worked on.

It was very obvious that despite different diseases we share many similar challenges with other patient organisations. For example in most organisations the work is carried out by volunteers: people who are either affected themselves or by a caregiver or a parent to somebody with an illness.

It is very beneficial to come together at these kinds of workshops, and to learn from one another. 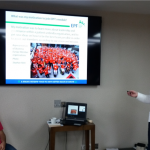