7th Biennial Workshop on Dystonia and Parkinson’s Disease in Rome

This workshop took place on September 18th and 19th; its planner was Prof Antonio Pisani (Tor Vergata University, Rome) who has organised this event since 2007.

Dystonia and Parkinson’s disease have traditionally been viewed as distinct movement disorders. However, compelling clinical and experimental evidence suggest that these diseases can share, at least to some extent, common pathogenic features.

As for the past workshops, this biennial meeting has been focussed on clinical and scientific aspects bridging Dystonia and Parkinson’s disease (PD). The primary aim of this meeting has been to provide a complete overview of these potential interactions.
This year’s title was “Cellular and molecular targets for novel therapeutics” and the sessions were focussed on:
– Dystonia and PD: new genes, new therapeutics targets (are gene products leading to discoveries for novel therapeutic agents?)
-Novel cellular and molecular targets (do dystonia targets apply for PD?)
-Novel technologies for dystonia and PD research
-Molecular targets for dystonia and PD: clues from treatable inherited disorders.

More than 30 doctors from various countries (USA, Canada, France, Germany, United Kingdom, Belgium, Spain and Italy) spoke about and discussed the above topics with great interaction between speakers and chairs, aiming to fill the gap between basic and clinical neuroscience. One of the speakers was Dr.Niccolò Mencacci  (Chicago Northwestern University) who in 2017 received the David Marsden Award  during the D-DAYs in Rome.

The workshop was addressed to neurologists, biologists, physiotherapists, neurophysio-pathologists and geneticists; there were many of them and mostly young. The training objectives concerned: care and diagnostic pathways, rehabilitation and medical reports.

The workshop was supported by Dystonia Medical Research Foundation, International Parkinson and Movement Disorders Society, Parkinson Disease Foundation and by The Bachmann Strauss Dystonia and Parkinson Foundation, whose President Mrs. Bonnie Strauss attended the meeting and reminded us that she had her diagnosis of cervical dystonia 7 years after its first symptoms.

As usual the workshop was held in an outstanding place: the “Nobile Collegio Chimico Farmaceutico” which is a church of the 9th century built in a Roman temple facing the Forum.

In 141 AD  Emperor Antonino built a temple in honour of his wife Faustina and after his death the temple was dedicated to him too, and it’s still possible to read this on the lintel. In the 9th century the temple became a Catholic church dedicated to St.Lawrence and in 1429  Pope Martino granted it to the Roman Apothecaries University who still own it. The former temple door, which now is a window, provides an amazing view of the Roman Forum from an unusual and usually not accessible perspective. 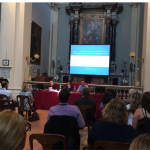 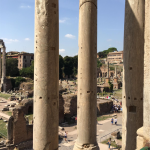 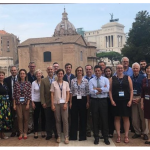