A book presented at the A.R.D meeting in Florence, Italy.

Carlo Iacomucci is an artist, born in Urbino, the birthplace of Raphael.

He began to draw at the age of 13 years and to paint and engrave at 22, he has been a professor of painting disciplines for 36 years.
There is no doubt that he used his right hand very much, in 2004 he began to feel a strong unbearable heat in it, he could not hold his brush or chisel very well and eventually was diagnosed with “task specific focal dystonia”.

He remembers that when he was teaching at school he felt uneasy, as his hand did not obey and his students did not understand what was going on. He had to accept that he could not rely on his hand, but thanks to his willpower and mental toughness he never fell into depression.
In order to make the best use of his right hand, Mr. Iacomucci has  developed a peculiar sensory trick as you may see in the photo, he touches his right middle finger with his left middle finger, so as to avoid involuntary movements and be able to grip his brush or the pen.

The dose of his first injection of botulinum toxin was too high and for 2 months his hand was paralysed. Afterwards he changed hospital, having correct dosage of injections.  It was suggested by his doctors to exercise and re-educate his hand, writing and drawing in a notebook. He wrote many pages copying  texts about the graphical techniques he used  (xylographs, etchings with acid, aquatints, etc) adding his drawings on each page.

After 10 years of “exercises” his notebook had become part of his life, and he was encouraged by his friends and his neurologist to transform his notebook into an art book, which he presented for the first time at our A.R.D meeting in Florence, as it had just been printed.

The book has a revealing title “The Rebel Hand” and is composed of 40 drawings made with graphic pens, stamp punches and graphite shades. Each page has its date, showing that he created the book between 2008 and 2018; he has some recurring drawing themes: drops or traces (often 7, like 7 colours of light), tailor’s dummies and the kite.

Under the pretext of making writing and drawing exercises for re-educating his hand, he recorded in black and white his poetry and his art.

Many books about dystonia have been published up to now, but usually they deal with stories of people with the disease. In Italy this is the first and only  book with drawings by a dystonic hand and we thank Mr. Iacomucci who shows us how to take back possession of a “rebel hand”. 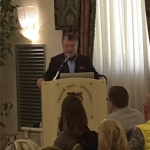 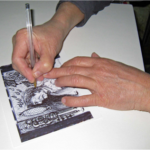 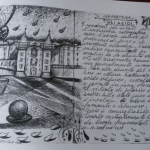 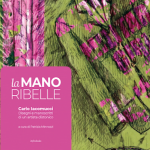