Home › News › Poland, the second country in Europe with the Brain Plan

Poland, the second country in Europe with the Brain Plan

A strategic Brain Plan report for Poland was announced on World Brain Day, July 22, 2019 after several years of work lead by NeuroPozytywni Foundation. The document was prepared by the foundation in cooperation with many experts. The event was organized with the support of the Patients’ Ombudsman office in Warsaw. “Brain Plan for Poland” is the first attempt to analyse the Polish model of health care for patients with brain diseases in social, legal and economic terms.

The first national brain plan in Europe was launched in Norway in December 2017 however, the Polish brain plan was initiated as the first in Europe.

No support was received from the Polish Government up to that point.

NeuroPozytywni is a foundation whose mission is to support people with widely misunderstood brain diseases (multiple sclerosis, cerebral palsy, epilepsy, depression, schizophrenia, Parkinson’s disease, Alzheimer’s disease, migraine, stroke and many others) and their relatives. The Foundation cooperates with the European Brain Council [EBC].

Panellists included prof. Piotr Gałecki – national consultant in the field of psychiatry, prof. Jarosław Sławek – chairman of the Polish Neurological Society, Iza Czarnecka-Walicka – president of the NeuroPozytywni foundation and Agnieszka Wernik – director of the Department of Strategy and Systemic Activities of the Patient Rights Ombudsman.

The event was also attended by representatives of international organizations – Marijn Scholte, European Brain Council and Tadeusz Hawrot, European Federation of Neurological Associations. After listening to the presentation, the conference ended with a panel discussion on ‘Brain diseases, patient priorities and health policy priorities at national and European level’.

The conference was organized by the European Federation of Neurological Associations [EFNA] as one of four that day in various European countries. The event was linked to the EFNA campaign. The #BrainLifeGoals campaign raise awareness of the impact of neurological diseases by exploring the dreams and aspirations of those living with a brain disorder.

The event was attended by the president of Dystonia Europe, as a representative of the Polish Dystonia Association. 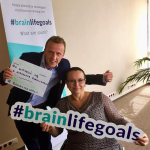 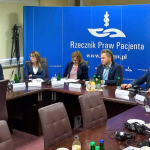 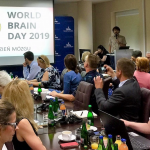