Annual Meeting of The Associazione Per La Ricerca Sulla Distonia

On March 23rd, 2019  A.R.D. held its annual meeting in Hotel Adriatico in  Florence; our last meeting in this charming town had been in 2007 and the first one was 20 years ago, in 1999.
The title for this year was  “Looking to the future: research and experience in comparison” as we wanted to focus both on new studies and on acquired experience.

Since 2012 A.R.D. has awarded 2 prizes “Best study about dystonia by young doctors” (each of 1000 €) on the occasion of the annual congress of the Italian Neurological Society (SIN); in 2018,
2 more awards (each of 2000 €) were introduced on the occasion of the annual congress of the Movement Disorders Society (LIMPE-DISMOV), with the same title.
The 4 young doctors awarded in 2018 have been invited to our meeting to present their work but we also asked them to tell us their story: why did they choose to be involved in dystonia? Which disease feature do they face every day?
We think that research and young doctors are very important for our future, we must stimulate them to develop knowledge and interest in this often neglected disease.

Our meeting started with Dr. Francesca Morgante, a neurologist who has worked for many years on dystonia and is based in St. George’s Hospital in London, UK.
Dr. Morgante gave an update on novel research studies focusing on the disease. Specifically, she reported on novel research for the following topics: genetic causes, such as the KMT2B mutation; brain mechanisms determining different types of dystonias; non motor symptoms, and in particular pain and psychiatric symptoms; combined treatment of dystonia with physiotherapy and botulinum toxin; treatment with Deep Brain Stimulation. She also mentioned some studies on animal models, which have investigated the contribution of dopamine to the disease. The discussion was very interactive with many questions on current pharmacological and surgical treatments and reports of personal experiences on living with the disease. Some questions inquired about therapeutic use of cannabis for dystonia and Dr Morgante replied that, so far, there are no scientific data available supporting the use of this medication.
Research involves many groups around the world and many enthusiastic young researchers, who are committed to understand its causes and  mechanism, in order to define a personalized approach for people living with dystonia.

After Dr.Morgante, the 4 awarded doctors have presented their work.
Dr Enrico Saibene is a young physiotherapist (aged 23) and is working in Hospital Santa Maria Nascente in Milan.  He approached dystonia by chance, as he was given a graduate thesis about  this disorder, which is little known in physiotherapy too.  As the topic was challenging and new, he decided to continue and now he is involved in the therapeutical treatment described in his work:
“Effectiveness of a combined treatment of cervical dystonia through a new rehabilitation approach with botulinum toxin”. He was awarded  during the LIMPE-DISMOV Congress last May 2018.
This method  is named  SPRInt (Sensorimotor Perceptive Rehabilitation Integrated approach) and combines botulinum toxin therapy with biofeedback and spatial rehabilitation techniques. After the injection, patients begin the rehabilitation program 3 times a week, for 18 weeks.
The SPRInt approach seems to be a valid instrument for the cervical dystonia treatment, improving on disability, severity and cervical deviation.

Dr. Paola Imbriani is specialized in Neurology and is now at her second year of PhD in Neurosciences at Tor Vergata University in Rome. She began  her career with clinical research about Parkinson, then she passed to basic research in laboratory: she carries out studies on animal models in order to find out the pathology mechanisms, investigating about neuronal cells.
Her work  “Early structural and functional plasticity alterations in a susceptibility period in DYT1 dystonia striatum” received the ARD award during the SIN Congress in Rome last October 2018. It is work rather difficult for laypersons, as it deals with very specialis terms and concepts.
Studies were carried out in young and adult mice, checking synaptic plasticity at a defined post natal time window in a DYT1 mouse model, in order to evaluate  whether plasticity abnormalities  occur early in life or later as adaptive changes.

Dr. Sabino D’Agostino is a neurologist aged 29 and works in Azienda Ospedaliera Monserrato in Cagliari.  He began his speech remembering  that in his books of neurology only a short paragraph concerned dystonia, and when at the beginning of his career he was asked to take care of blepharospasm he barely knew what kind of disease it was. But later he got interested and now he is following many patients with dystonic problems.
His work “Sensory trick in task specific upper limb dystonia” was prized in the SIN Congress in Rome. The sensory trick is a specific feature of dystonia and is very common mainly in cervical dystonia and blepharospasm. In arm dystonia it is not so common, having a frequency around 20%. The results of his study are that performing the trick manoeuvre improves handwriting  in 38% of patients, therefore it may be potentially more frequent than usually observed. Moreover, when sensory trick was effective, it was helpful when distinguishing dystonic and non dystonic tremor.

Dr. Elisa Andrenelli, after getting a PhD in Neurodegenerative diseases has specialized in Neurorehabilitation;  she worked for 18 months in Messina and then in  London with Dr.Morgante. Now she works in the Hospital of Ancona.
She received the ARD award last May 2018 during the LIMPE-DISMOV Congress with her work

Kinesiotaping is a rehabilitative taping technique invented in 1993 by a Japanese chiropractor and consists in placing a tape on a target muscle, in order to reduce abnormal tension, providing support and stability to muscles. In her study, tapings were applied for 5 days to patients with idiopatic  cervical dystonia  and pain, 3 months after their botulinum toxin injections, demonstrating that KT can reduce pain and disability, especially with tremor, through enhancing the effect of botulinum toxin in the interval between consecutive injections.

The last  speaker of the morning was Dr. Silvia Brogelli, an oculist working in Florence  who is involved in A.R.D. since its beginning. She gave us a booklet published on the occasion of a meeting she organised  in Florence “Update on Dystonia –therapeutical use of neurotoxins” dated April 10th 1999, exactly 20 years ago!  In 1988 Dr. Brogelli  wrote her first works about  botulinum toxin use in human tissues, thanks to the cooperation between the Oculistic Universitary Clinic of Florence and Mrs. Mattie Lou Koster, a Texan lady with blepharospasm who in 1981 had created BEBRF – Benign Essential Blepharospasm Research Foundation. These works received compliments by Dr. John Patrick Lee, the ophtalmologist who first introduced the use of botulinum toxin for blepharospasm in Great Britain. The title of Dr. Brogelli’s  speech was “What has changed in blepharospasm therapy after 20 years?” Some innovative therapies issued in the last 5 years are: cure of ocular surface with lacrimal substitutes (artificial tears, eye drops, collyrium, ophthalmic gel); proceedings on Meibomian glandes (their dysfunctions occlude tear ducts; the glandes secretion may be reactivate by physical treatments on eye lids); special filters on eyeglasses (excluding ultraviolet light); new surgical ophtalmoplastic treatments with laser, which don’t leave scars; antidystonic medications like syrups made from cannabis, whose effectiveness is still controversial (therapeutic cannabis is produced by Military Pharmaceutical Institute in Florence since 2017) .

After the lunch  our  meeting scheduled 3 stories of persons with dystonia.

Mrs.Cristina Frosini has been the first to tell us her story: she is a musician who began to study piano when very young, becoming  a professional piano player and giving concerts around the world.  In 2000 she realized  that her middle finger  had some problems, as it  bended on her palm  and did not allow her to press the piano keys. For 3 years she could keep on playing  in concerts only using her thumb and index finger, as the other 3 were unusable,  but  in 2003 she had  her career ended as she could not play the piano any more. In the meantime she had different diagnosis by neurologists, orthopedists and hand surgeons; eventually  she had the middle finger tendon operated, but the problems increased. In 2005 by chance she went to a congress about musicians diseases in Milan, she saw a video with a piano player who had her same finger problem, so she discovered focal dystonia (she knew nothing about this disease, at first she supposed it was an oculistic problem!) She went to Hannover where  Prof.Altenmueller confirmed this diagnosis, that was probably the same type of dystonia which Robert Schumann had.
Later she began botulin toxin injections and rehabilitation; at last in May 2012 she could play again in public, in a concert organized by the German Dystonia Association. Since then, she has  continued her rehabilitation, which is not yet complete (5% is still missing) but she is giving concerts again. In 2016 she was appointed Director of Conservatorio Giuseppe Verdi in Milan, an important job  which also allows her to inform students about this pathology, its prevention and its cure. If immediately detected, musician dystonia may be easily faced and defeated. She has developed an innovative program of body awareness for students “ Play music and feel good”. 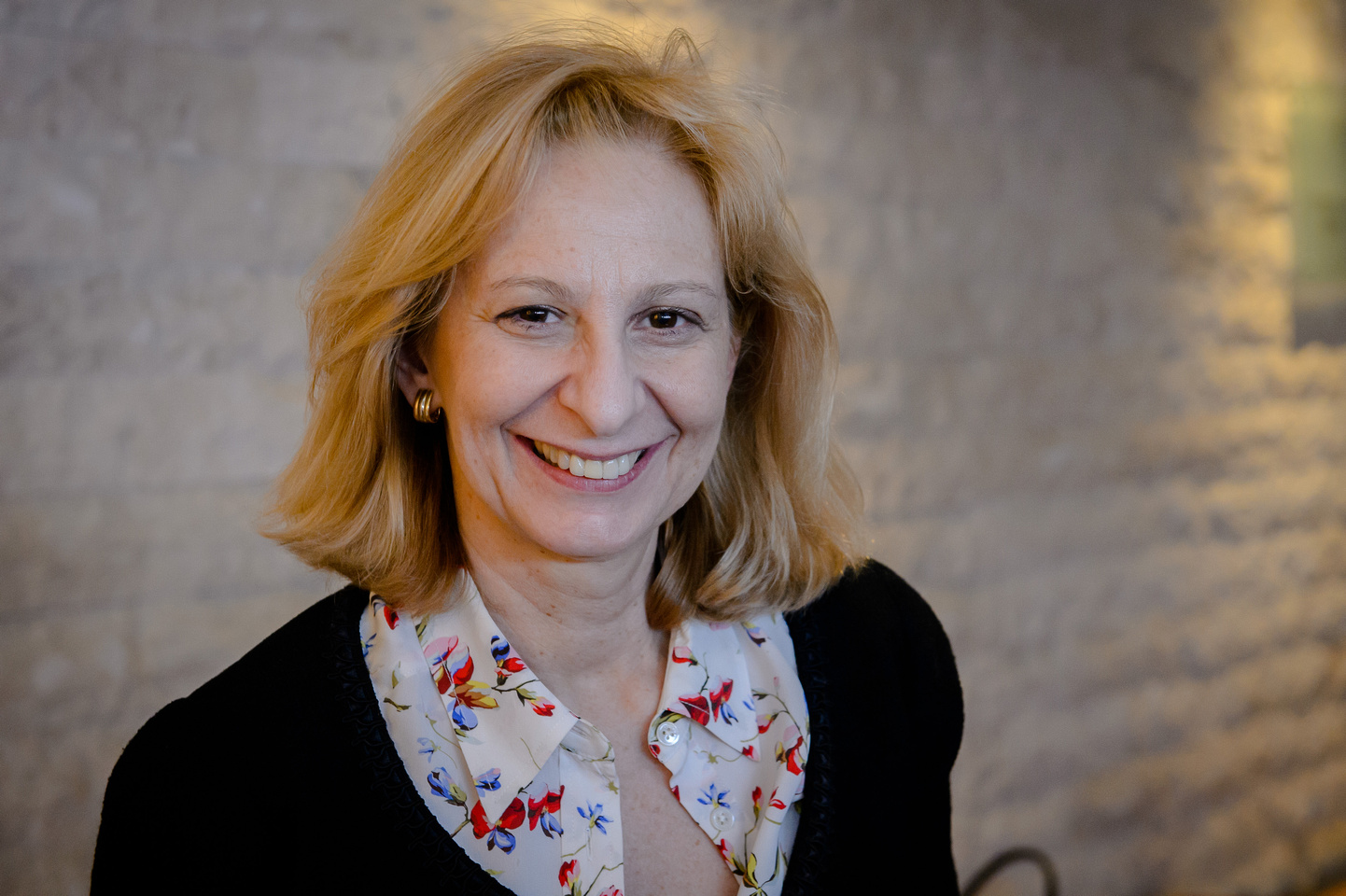 Our second speaker with an autobiographical story has been Mrs Laura Latini: in 1991 she began to have symptoms of spasmodic dysphonia and she could not receive any correct diagnosis in Italy. She went to Columbia University in New York where  Prof Mitchell Brin, neurologist, and Prof. A.Blitzer, otolaryngologist, explained for her the disease, its unknown causes and the absence of a specific cure.  Back to Italy, she addressed to Gemelli Hospital in Rome where she met Prof.Alberto Albanese, who in that period (spring 1992) had  just  created our Association. She became a representative of A.R.D ; in June 1993, she took part in the meeting about Movement Disorders in Spoleto, with delegates from 10 European countries, where the European Dystonia Federation was founded. She remembers that it  was really rewarding working with important persons involved in EDF like Didi Jackson, Feli Justo Alonso, Alistair Newton. By means of the work pursued by EDF, it was possible to establish a close and constructive relationship  with the international medical community, who has learned to acknowledge the patient’s organizations as necessary for spreading information about the disease and essential for making progress in research . 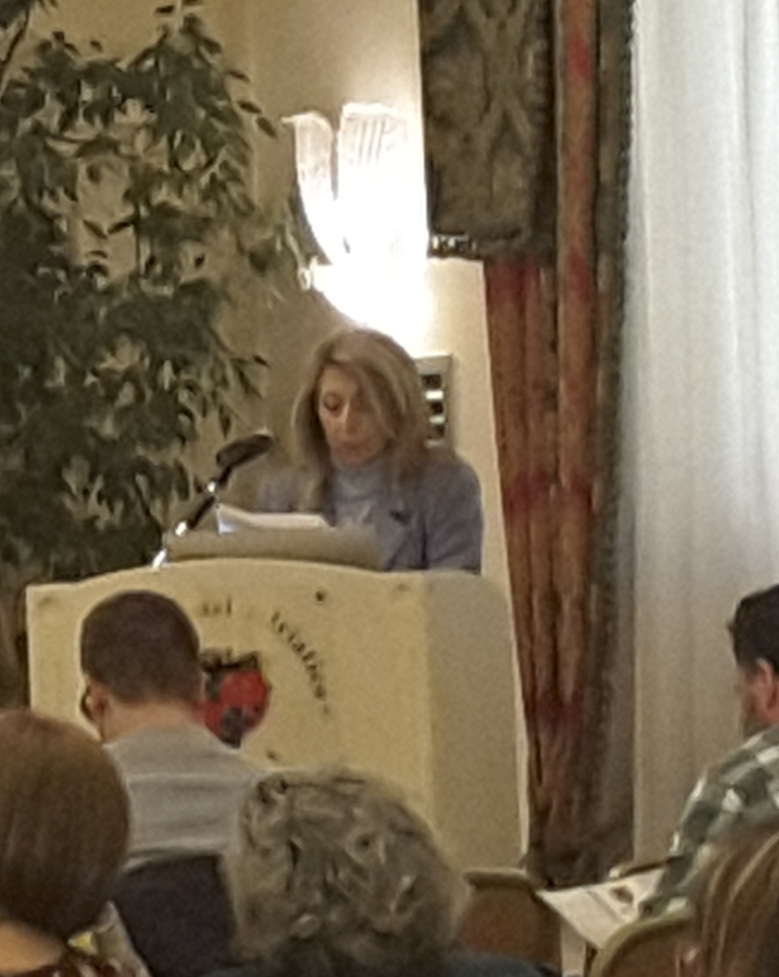 In the next Dystonia Europe Newsletter you can read the story of our third speaker Mr. Carlo Iacomucci.

About 80 persons took part in our meeting; many of them are longtime members, but every year at our conference  we meet new members, who have recently had their diagnosis and rely upon us for help and support. We are 8 volunteer women who manage A.R.D. trying to do our best for spreading  awareness about dystonia and supporting patients.