The Annual General Assembly of the Deutsche Dystonie Gesellschaft  (DDG) was chaired by its president Hedwig Hagg and took place in the Hotel Strada in Kassel from 21st to 22nd July 2018. “Dystonia is moving – back then and today” (Dystonie bewegt – damals wie heute) was the motto of the event. Four people from Switzerland attended meeting: Claudia Schmid and Micheline Johnson from the board of the Swiss Dystonia Association SDG, Erhard Mätzener, auditor of SDG and treasurer of Dystonia Europe, and his partner Liselotte Illi.

The night before the meeting, on the occasion of the ‘silver wedding’, so to speak, the conversation went back to the birth of DDG in 1993. We strongly felt how close birth and death are by commemorating Didi Jackson, a person who set the pace for DDG and later for EDF – now Dystonia Europe: Member of the board, treasurer and later as chairwoman. As her son has fallen ill, an epitaph was presented by Christa Hafenscher, founder and honorary president of the Austrian Dystonia Association.

A speech was given then by Ms. Dr. E. Lohmann elaborating on the historical trail of Dystonia diagnostics. She spoke about the problems in description and separation of Dystonia from the 18th century on to today’s diagnostics. The term “Dystonia” for the first time occurred in 1911. It described a symptom. “Dys” stands for “bad” or “wrong” and “tonus” means “tension”. It was Hermann Oppenheim, who created the expression and described the different types of Dystonia. Jean-Marie Charcot, the founder of modern neurology, postulated a neurological cause of Dystonia 100 years ago. For some decades thereafter the psychoanalytical approach of Sigmund Freud and his ideas on unconscious conflicts causing organic problems was very popular.

Although there did not exist a term for this movement disorder, in 1614 cervical dystonia was described by Felix Platter as “disease of muscles and adjoining connective tissues”. In 1700 Bernardino Ramazzini called action-induced dystonia muscular diseases. Today the following aspects are important for a reliable diagnosis: Age when disease occurred, distribution/spreading of symptoms, and beginning and progress as a dynamic approach. Furthermore, other diseases must be excluded. The diagnostics of dystonia is based on blood analysis, neuro-imaging, electrophysiology and genetic tests.

The next presentation with the headline “Reminiscence of the early days of botulinum therapy” was held by Prof Peter Roggenkämper, Ophthalmologist. He shortly described how the detection of the therapeutic benefit of botulinum toxin began. In 1822 the doctor and poet Justinus Kerner (also gourmet of wine – a vine is still called “Kerner”) thought about the sausage poison (Wurstgift) as a possible remedy for diseases with motor-driven hyper nervousness.

Prof Roggenkämper’s vested interest started in 1979. It was at a conference in Bern, when he became aware of Alan B. Scott, who used botulinum toxin for a reversible weakening of the ocular muscles (chemo-denervation) as alternative to surgery of strabismus. Since 1985 Prof Roggenkämper has been treating blepharospasm with botulinum toxin too. Up to the end of the 1980s Botox was delivered via Scott before Allergan took up the distribution and established a new price policy.

In London Prof Frank Erbguth, the next speaker, met David Marsden, who acquired huge merits as to research and treatment of neurological movement disorders and dystonia and still has personal mementos to him. He diagnosed dystonia a basal ganglia disease. Sadly, he died early, but his heritage is brought forward. Still today prizes are granted to researchers in his name, e.g. the David Marsden Award of € 10’000, which Dystonia Europe is granting in a biannual cycle.

He was facing the inception of botulinum toxin and its triumphal performance from 1985 on. A great deal of diplomatic intervention with the customs authorities was necessary before the official approval, because botulinum toxin is classified a biological weapon in military circles. A great deal of progress has been achieved in the meantime to improve the application of botulinum toxin in sub forms of cervical dystonia by ultrasound or the collum caput concept. Electromyography e.g. helps to better identify the injection point.

The morning session was concluded with a touching, but also positive review by Elke Schilling, a person concerned with dystonia for 25 years. Her statement once more confirmed the maxim: Together we are strong.

Prof Andreas Kupsch from Berlin referred to deep brain stimulation (DBS) – from history to the future. He started with the statement that (except for the Segawa syndrome) there is no satisfying pharmacological treatment besides botulinum toxin.

Neurostimulation (DBS) consists of implanting electrodes into different brain areas and activating a pace maker with a battery outside the brain. It is basically reversible, because the impulses to the electrodes can be switched off.

The breakthrough was achieved in 1987/88, when Alim Louis Benabid applied this procedure to a tremor patient and then published the outcome in renowned scientific ‘Lancet’. DBS is allowed for essential tremor, Parkinson and also for dystonia. Interesting what the future might bring. In epilepsy and psychiatry (depressions) there already exists promising results

Complications cannot completely be excluded: The risk of dying through the operation is 0.5 percent. Infection risk lies at 2 percent. An operation costs as much as a small car. The main challenge of this technique is to better find and hit the optimal dystonia target point.

An important parameter for the success of a neurological therapy is measuring the quality of life. Prof Kupsch showed by means of 2 audio tests how the surgeon’s team can listen into the brain during the operation. With a loudspeaker connected to the electrodes the frequency of the deep contact places in the brain can be measured. There is hope that already during the operation placement of the electrodes can be judged correctly. The muscle activity of dystonia patients is about 4 hertz on average.

Summary: Good results are achieved with cervical dystonia, DYT-1 dystonia, DYT-11 dystonia, tardive dystonia and partly with generalised forms of dystonia. Three to six months of continued stimulation may pass before an effect becomes perceptible. The outlook in the future is closely linked to the technical advances. At first Medtronic was the only supplier of DBS systems. With St. Jude and Boston Scientific the competition has grown. New types of electrodes have been developed. Similar to cardiac pacemakers, research is pushed towards “low weight devices”. Not only 4 electrodes, but 8 are implanted nowadays in order to activate more tissue. Electric fields can thus better be adapted to the anatomic shape of the brain.

Finally Prof Kupsch presented the winner of the eleventh Oppenheim price, Dr Michael Zech. He is active in the third main research focus of dystonia, the genetics. The prize of € 5000 is awarded biannually. Hedwig Hagg, Chairwoman of the Deutsche Dystonie Gesellschaft DDG handed the prize over to Dr Zech, who reported on the recent identification of a new genetic defect (KMT2B) triggering dystonia.

In the last presentation Dr Thorsten Odorfer talked about a study on torticollis carried out in Würzburg. It deals with the question whether botulinum toxin should be considered therapy of choice, as is the case to date, or deep brain stimulation.

The afternoon session was closed with compliments to the jubilee. On behalf of Dystonia Europe, Erhard Mätzener handed a beautiful bouquet of flowers to Chairwoman Hedwig Hagg. Many members of the DDG having supported the organisation during its 25 years of existence were honoured. Martina Kühn, treasurer for the last 9 years, received special applause.

The event closed with a dinner in a festive atmosphere with interesting conversations.

A dance performance based on a song by Ute Kühn, former chairwoman of DDG, was touching. The title of the song, “Gutes Gift” (good poison), might perplex a little bit, but it is reality for many people affected by dystonia.

It is with thankfulness we are looking back to exciting and informative days in Kassel and we are looking forward to building new contacts and reinforcing our good collaboration.

While our friends of the DDG had to work again on Sunday (GA at 10 o’clock), sightseeing was scheduled for us, as the trip back to Switzerland for the four of us was scheduled for Monday. It was a hot and sunny day.

Water is fascinating, notably on hot days. Therefore we were excited to admire the gigantic water game in the Bergpark Wilhelmshöhe, a UNESCO world heritage site. Thousands of other people linked this idea to a Sunday afternoon promenade. The whole spectacle started at 14.30 sharp high up at the Hercules monument. The flood then flew down by 4 stages on its 2.3 km trip to the pool at a 200m lower level, where a huge fountain marked the climax and the end. The big cascades first, then the Steinhöfer waterfall, the devil’s bridge. Finally an aqueduct led the flood into the fountain pool.

The water gates are opened and the flood starts flowing to the next stage at the exact scheduled time. Thus the spectators can move downwards seeking the best places for the next attraction. The whole game lasts 75 minutes.

We finished the eventful day at an old beer garden, where we satisfied our hunger and thirst and had a lot to discuss, before we went back to our lodging pretty late. 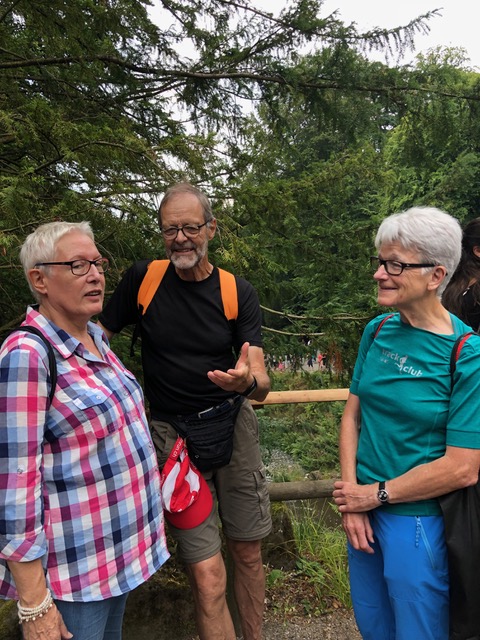