Advertised as ‘D-Days 2018’, this conference in Brussels marked the 25th anniversary of Dystonia Europe. After an introductory session and three presentations in the European Parliament where several MEPs were present and involved on Thursday 12 April, we were given a guided tour of the heart of this huge building complex. Already a theme was coming through – although the UK is dealing with Brexit, many joint European projects and research initiatives would continue.

First came a presentation on the history of dystonia by Professor Patrick Santens from Ghent University Hospital. He reminded us all that dystonia dates back to the ancient and medieval worlds despite not being medically defined until the early twentieth century.

Then Alistair Newton from St. Andrews, Scotland set the historical context for 25 years of Dystonia Europe. As he was one of the founders of the organization he was perfectly placed to celebrate this 25th-anniversary conference. His passion for creating a Europe wide organization to help those with dystonia had the effect he said of ‘making him work harder than he had ever worked before’.

He reminded people that worldwide there are over 6 million people with dystonia; the third most common movement disorder. He ended by telling us there are now 18 European countries with National Patient Group members working together under the Dystonia Europe umbrella. He said that the whole process of seeing the organisation grow and the meetings and yearly conferences in many cities had felt like riding in an international express train. It had taken him all around Europe, given him many new friends and great enjoyment in his work.

Monika Benson, President of Dystonia Europe from 2007-2013 and now the Executive Director, then gave a brief overview of the David Marsden award. Started in 2003 by Dystonia Europe it is an award of 10,000 euros to young clinical researchers papers showing innovative and ground-breaking published research into different aspects of dystonia and it is given out every two years see: http://www.davidmarsdenaward.org/ for full details.

Like Avery with whom she works with closely, Monika has cervical dystonia too. Whilst being unable to do things properly when she first developed symptoms she says in her Youtube dystonia story that it made her think ‘Where is the old Monika’ until treatment gave her old self back again. Helpful, encouraging, speaking to many and encouraging people to be part of the ‘dystogram’ shots in break times between talks. 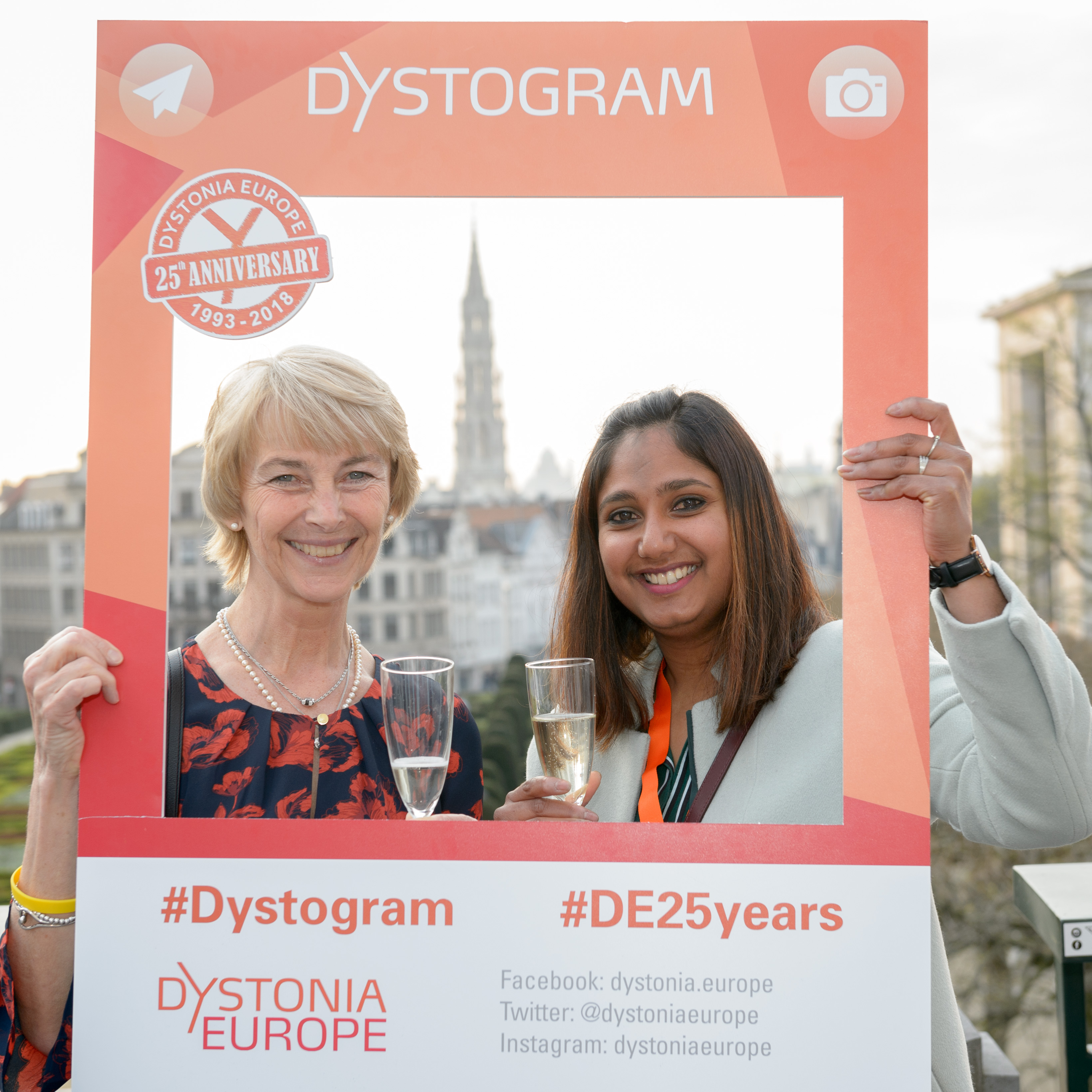 The dystogram was a large cardboard frame which people posed behind to be photographed by the excellent on-site photographer Stephan Röhl who has worked on the Dystonia Europe conference photography since 2012. Monika helped carry the whole event with her energetic approach.

Also in the morning; a joint presentation with a wider picture about two important European initiatives. Donna Walsh talked about the European Federation of Neurological Associations (EFNA) an umbrella group representing European neurology patient groups (including Dystonia Europe) with a vision of creating a better quality of life for people across Europe with a neurological disorder. Then Frederic Destrebecq following on from Donna’s presentation on the European Brain Council (EBC) based in Brussels.

The EBC comprises of the major organisations in the field of brain research and brain disorders. This contains a vast network of patients, scientists, and doctors, working in partnership with the pharmaceutical and medical devices industries. During questions taken at the end of the presentation, we could see that these organisations worked closely together.

What had come over on the Thursday meeting at the European Parliament was that 1 in 3 people will suffer from a brain disorder in their lifetime and it costs European countries about 800 billion euros a year in treatment costs. The single biggest economic challenge to the European health care systems. This is where organisations that lobby on behalf of the patient and conduct research become so important.

In the afternoon of the first day, Professor Klein told us of a German Government funded project looking at all 7,000 known rare diseases in 10 funded networks. For DysTract – the part of the project looking at the dystonias – she explained that researchers were looking at the entire disease path of dystonia upwards. That is from the molecular level to the main exhibiting symptoms. So often it is looked at and treated from the symptoms downwards. Interestingly she felt DBS, now routinely used in treating Parkinson’s, could be more widely used for dystonia.

Professor Maja Relja from Croatia presented her findings on her research project to train family doctors in diagnosing dystonia effectively. A local GP is the first and most important contact point for anyone looking for a diagnosis. Over her 5 year project Professor Relja worked on improving the doctor’s diagnosis of dystonia. 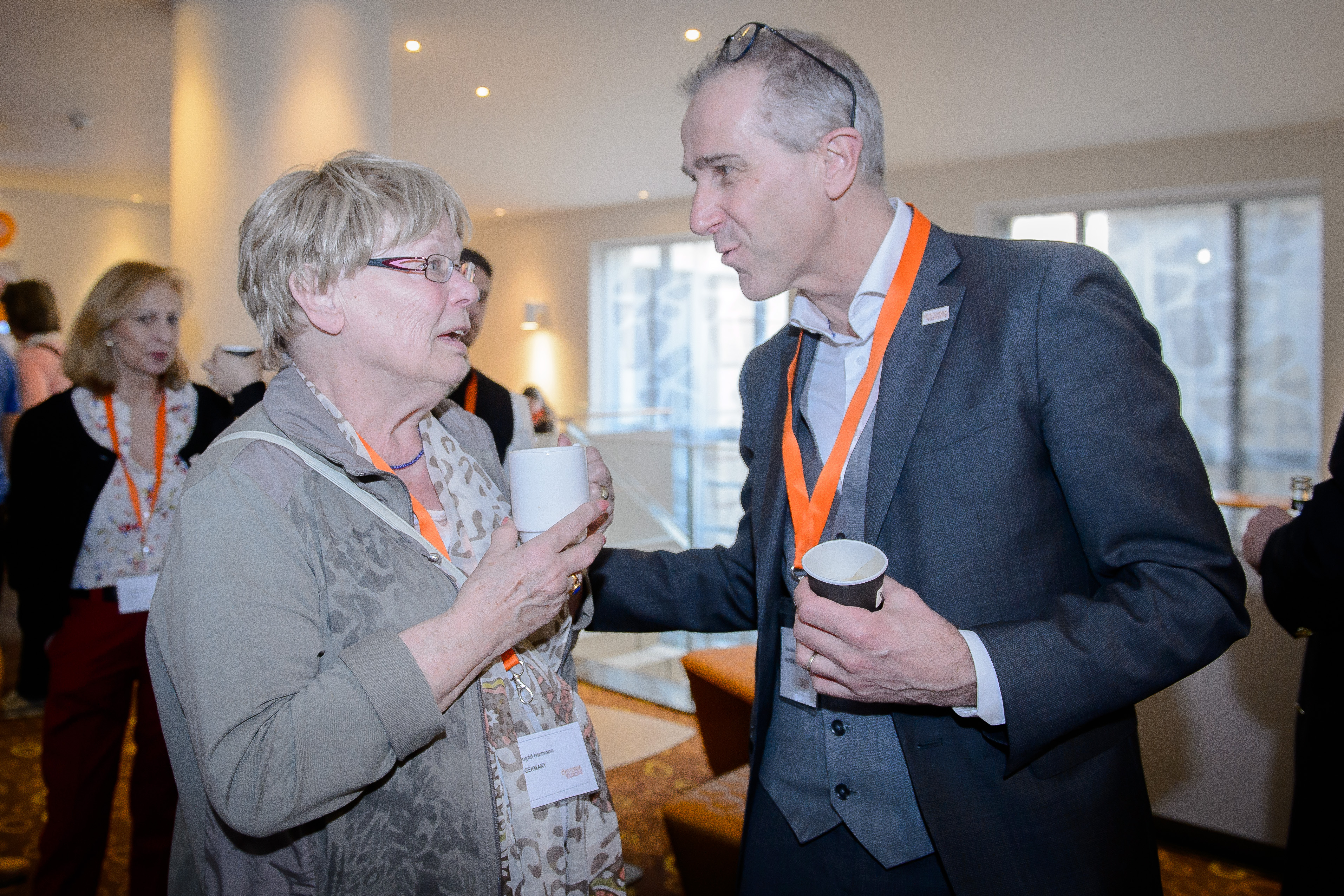 At the end of the presentation the inevitable question was asked; why wasn’t this work being done more widely throughout Europe in a coordinated way? Training of the family doctor remains a crucial part of timely and effective treatment for dystonia and a Europe-wide approach felt like a good idea.

In the evening, many of us walked to a restaurant named ‘Kwint’ some 20 minutes away walking up a gentle slope we ended up with a panoramic view of part of the city. A small bus offered others an alternative way of getting to and from the restaurant. The evening sun shone and we all drank a glass of champagne on the terrace and admired the view. The perfect antidote to a day of presentations. After a group photo with many people sporting the Dystonia Europe ‘Jump for Dystonia’ T-shirts, we went in for dinner. Good food and talks were followed by a quiz and then music and dancing. Soon many people were on the floor doing their thing – including me! On the walk home many of the 25th-anniversary party balloons from the restaurant were carried back to the hotel celebrating the ending of a great evening out.

On Saturday 14 April we saw the welcome addition of three personal accounts of patients experiences living with dystonia. This carried on the work of a series of dystonia stories launched by Dystonia Europe in 2013 – available to view on the Dystonia Europe Youtube Channel.

The first ‘My Dystonia Story’ was from Amybel Taylor from the UK. Her story was inspirational. Diagnosed with dystonia as a child she had lived with her symptoms until her late teens. Then after deciding it would benefit her she had DBS in 2010. This transformed her life and she went on to university and is now training as a Junior Doctor. She feels that her experience of dystonia will really help her as a clinician when dealing with patients with dystonia.

In the afternoon, physiotherapy for cervical dystonia was covered firstly by Joost van Den Dool from the University of Applied Sciences, Amsterdam. He concluded that a specialised programme of physiotherapy for patients worked better than generalised physiotherapy and was more cost-effective. Patients were more motivated and felt they got more from it. Then a man who has specialised in physiotherapy for cervical dystonia all his career; Dr. John-Pierre Bleton gave a practical demonstration with a man who was a motorcycle rider. ‘Do you suffer from twisting of the neck when riding your motorcycle?’ he asked. ‘No’ came the reply, ‘Not at all’. ‘This is why’ Dr. Bleton replied ‘you turn your neck continually and slowly to steer the motorcycle’. In saying this he showed how the daily exercises of gently turning the head in both directions slowly and without forcing muscles help ease the very tight muscles on one side and activate the underused ones on the other.

Professor Marjan Jahanshahi then gave a very good talk on living well with dystonia taken from many years of researching this area. Based at the Institute of Neurology at the University College London she reminded us that the medical model is of doctors simply rescuing patients from their illness. But also there is a self-management model that patients can work with to live well with a chronic condition in addition to their medical care.

From this, she gave her ’23 commandments’ for effective self-management. Amongst them were gaining information about dystonia (information is power), finding flexible and adaptive ways of coping, maintaining your self-esteem (a person is more than just their dystonia). A sense of identity, kindness to others and oneself and intelligence are important as is knowing what we can control and understanding our limitations and what we can’t control. Mindfulness and a positive mental attitude coupled with an appreciation of friends and family are helpful as is finding ways of building resilience.

A theme I recognised was the need to develop self-compassion and switch off that internal and often quite self-critical voice. Jahanshahi recommended always keeping time for leisure activities and not being tempted to cut down on them. If necessary speaking to your GP if there is a period of depression or anxiety, communicating with family pro-actively and maintaining a good social support network. It was a talk which gave much to empower a person suffering from dystonia and gave a great deal to take away and think about and work on.

Finally, there is a way we can all be involved. Adam Kalinowski, a young Polish man working for Dystonia Europe explained the My Dystonia App. A disease diary for dystonia that is available to download onto your phone after registering at www.mydystonia.com and activate your profile.

The diary then asks you questions which can be answered each day or periodically about how you feel and are coping. Over time you can generate a report from the information you put in and the data can be shared with your doctor or physician to aid treatment. So far 1700 people have used this and the hope was that this would keep on growing.

I came away from the conference being very impressed with the close commitment and teamwork involved with the group of Dystonia Europe staff organising it and their openness and helpful approach. The President Merete Avery working closely with Monika Benson the Executive Director alongside Adam Kalinowski and Sorin Ionescu, also the photographer Stephan Röhl and then everyone behind the scenes including staff translating all the talks for Flemish delegates.

Between them, they did a great job. The evening meals, a final coach tour of the city of Brussels on the second day of the conference and meal and all the group photographs enthusiastically and professionally organised by Stephan Röhl all built in a feeling that we were one group not groups of specialists, patients and organisers all feeling slightly separate from each other. Here’s to a very successful follow up 2019 conference in London!