The week after the Dystonia Europe 25th Anniversary events, NDF, the Norwegian Dystonia Association, held its 25th Anniversary celebration and Annual General Assembly at hotel Olavsgaard, just outside of Oslo.

75 dystonia patients and family members from across Norway had come to the event.

Saturday morning, after registration, NDF Chairman Johann Arnfinn Warvik, welcomed everybody to a weekend of celebrations. He introduced his team the NDF Board: Vice Chairwoman & Treasurer Sissel Buskerud, board members: Inger Johanne Nielsen, Line Mathiesen, Tove Nielsen and Rolf Villanger, who had written a dystonia poem especially for the occasion, which he read to the audience. 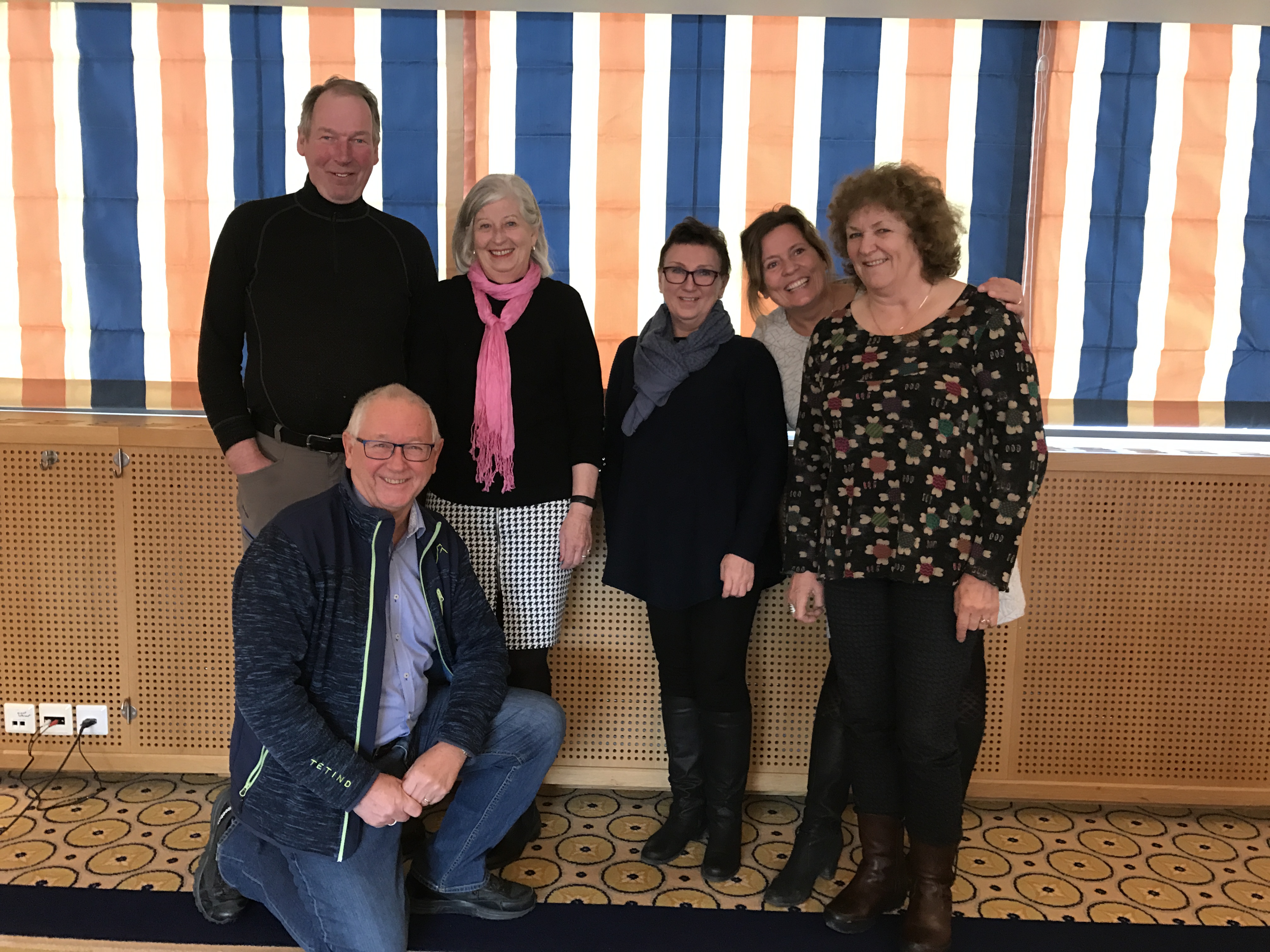 The Board of the Norwegian Dystonia Association.

Then followed a presentation of some of the activities and projects that had taken place over the last year. There had been many regional meetings for dystonia patients in different places across Norway. Two large members’ meetings are organized every year: one in the autumn, which took place in Tromsö, and one alongside the annual meeting in spring. The 2018 autumn meeting will take place in Stavanger beginning of October.

The international collaboration is important to receive information and share experiences and ideas with other organisations.

During the D-DAYs in Brussels the Scandinavian associations from Finland, Sweden, Denmark and Norway organized an informal meeting to see how they can work more together and collaborate on dystonia subjects such as for example awareness across the Nordic borders.

NDF has also been involved in the organization of a physiotherapy course held at Ullevål Hospital in Oslo. The course was aimed for physiotherapists in the Oslo region and to increase their knowledge on physiotherapy and dystonia.

In Norway there is a National Neurology Network which meets once a year to share experiences and ideas on how to inform and educate the medical profession better in dystonia.

Vice Chairwoman Sissel Buskerud talked a little bit about the MyDystonia App and encouraged the audience to use it.  She also pointed out that there is a lot of work involved to run an organization like NDF, such as talk to members, look for sponsors, contact with authorities and many administrative tasks.

The keynote speaker of the day was Professor Espen Dietrichs of Oslo University Hospital who held a presentation on plasticity and dystonia. Plasticity is the ability of the brain to change throughout an individual’s life – brain activity associated with a given function can be transferred to a different location, the proportion of  grey matter can change, and synapses may strengthen or weaken over time. There are theories that plastic changes in the cerebral cortex as well as in the basal ganglia can contribute to cause dystonia.  But the plasticity of the brain can also be used when relearning and retraining when you have dystonia. 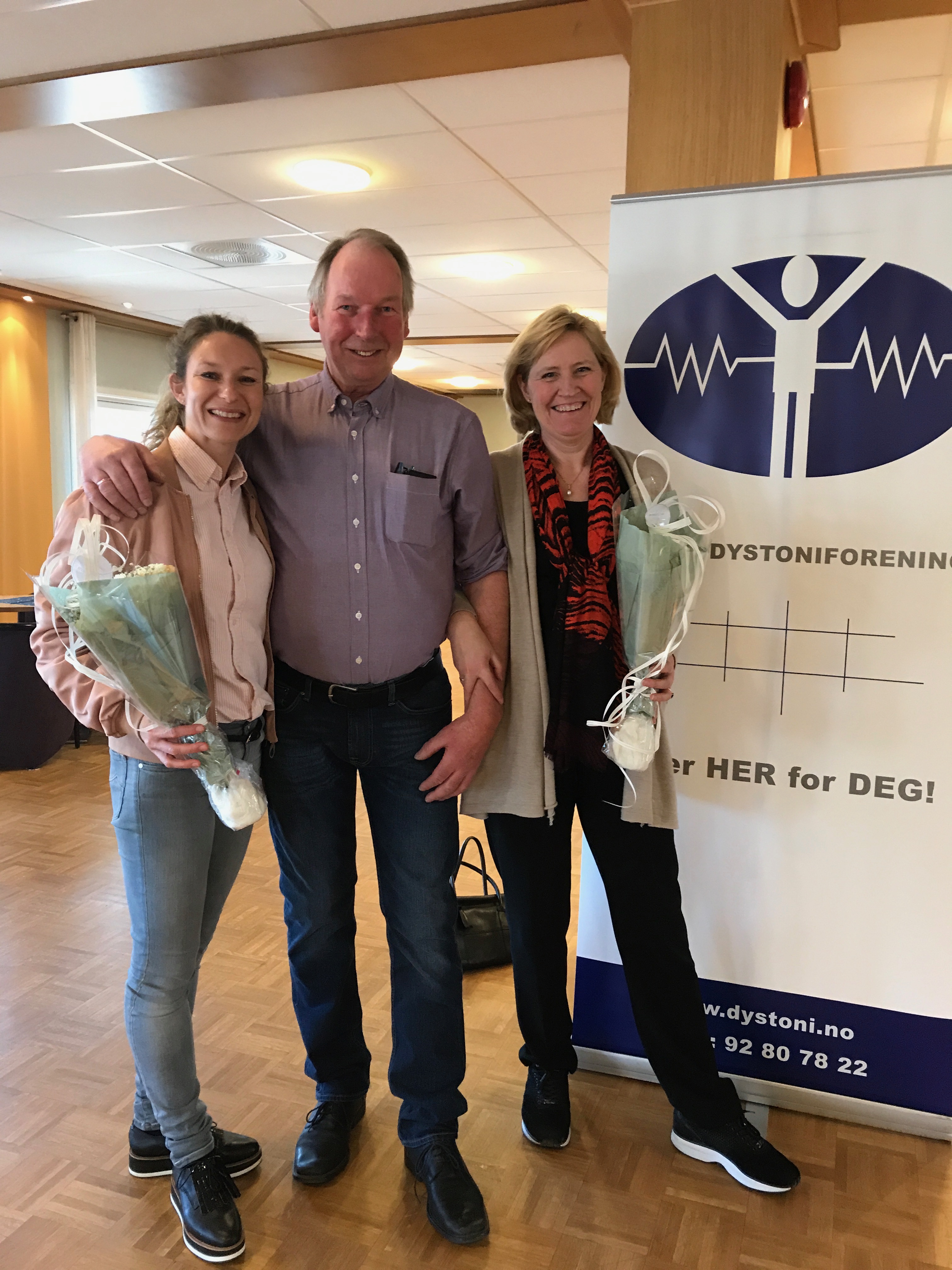 Neurologists Jannicke Koldeus-Falch from Ahus and Inger Marie Skogseide from Rikshospitalet in Oslo together with NDF Chairman Johann Arnfinn Warvik.

After lunch there was an Expert Panel of two neurologists Inger Marie Skogseide from Rikshospitalet in Oslo, Jannicke Koldeus-Falch from Ahus, and physiotherapist Lizbeth Fladby, also from Rikshospitalet. The audience could ask anything they wanted to know about dystonia and there were many different questions on the various types of dystonias, different treatments and its effects. The low level of knowledge about dystonia among the GPs was also discussed and what to do about it. Monika Benson shared that this is similar in other European countries. One idea could be for the national dystonia association to connect with the association for GPs in the country.

Maybe it could be possible to be included in the program at one of their conferences and share a dystonia patient story?  Inger Marie also urged for more dystonia awareness to raise awareness among the public as well as influence decision makers. She suggested that the Dystonia Association maybe should work together with Tremor patients to become a larger, stronger and more influential group.

In the evening there was an Anniversary dinner for the participants. The history of the organization had been collected and members of the NDF Board took us on a Norwegian Dystonia Patient Association journey from 1993 until today 2018. It was a pleasure to hear about all that has been achieved and how many people have been involved in leading the association forward throughout the years. Many, many thanks to all of them.

The NDF Board was presented with gifts from the Danish and the Swedish associations. From Dystonia Europe, Merete and Monika, thanked the board for their outstanding work for dystonia patients in Norway, as well as regional representatives who do an important work in their local networks supporting patients and their family members. Merete said: “it is always so positive to come to our meetings, and that is such a good feeling.”

We wish NDF much success in all their important work in the years to come.