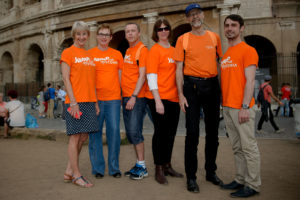 The 24th Dystonia Europe General Assembly was held on 12 May at the IBIS Styles Roma Hotel in Rome, Italy. Representatives from 15 of the 21 member organisations were present. They were from: Croatia, Norway, Denmark, Sweden, Finland, the UK, France, Germany, Ireland, Italy, Poland, Switzerland and Romania.
President Merete Avery welcomed everybody to the meeting and wished all participants some interesting and inspiring days in Rome.

Executive Director Monika Benson gave an overview of the work of the past year including projects and activities. The final accounts of 2016 were presented by the Dystonia Europe Treasurer Erhard Mätzener and were unanimously approved by the delegates.

One application for membership had been submitted by the dystonia patient organisation in Ukraine and the Assembly unanimously approved their membership. Unfortunately its President Natalia Titova could not attend the meeting in Rome but we look forward to a presentation of the Ukraine dystonia organisation in due course. At present Dystonia Europe has 22 member associations from 19 countries.

Then followed the election to the DE Board. Professor Maja Relja’s term as Vice President had come to an end after serving the maximum period of 6 years. Board Member Cristina Frosini had announced that she wished to step down. We thank Maja and Cristina for their time and many valuable contributions to the work of the Dystonia Europe Board. New nominations were Adam Kalinowski from Poland and Edwige Ponseel from France and their elections were unanimously approved by the Assembly. Up for re-election were Board Member Sorin Ionescu and President Merete Avery and they were both re-elected by the Assembly.

Over the last few months a survey had been sent to DE members about the format of the D-DAYs and DE activities. Monika presented the result of the survey wich included various ideas as well as members’ top three activities for DE to focus on:
1. Raise awareness, 2. Information on treatment and research, 3. D-DAYs.

It had been suggested already at the GA 2016 in Oslo to establish an awareness day/week/month for Dystonia in Europe. Suggestions had been made that we would follow the global dystonia community (US, Australia) and dedicate the month of September to Dystonia. The Assembly approved this suggestion. More information will follow on how we can work together on this effort.

Merete and Monika presented the Dystonia Europe activities 2017 which will include the following projects: MyDystonia APP and the MyDystonia Ambassador Programme, Dystonia Survey 2017, development of DE website, and the upcoming Dystonia Europe 25th Anniversary and D-DAYs 2018.
These will be held in Brussels on 12-15 April 2018. Information on venue will follow soon.