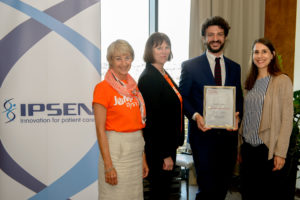 Our congratulations to Dr. Niccolò Mencacci and the David Marsden Award 2017 for his paper: “A Missense Mutation in KCTD17 Causes Autosomal Dominant Myoclonus-Dystonia”. Dr Mencacci was presented with the award by Dystonia Europe President Merete Avery at the D-DAYs 2017 held in Rome last weekend. Dr Mencacci expressed his thanks to DE and Ipsen for the award and then presented the work of his research.

About the winner
Dr Mencacci is originally from Milan where he also received his medical degree. From 2011 until 2016 he was clinical research associate at the Institute of Neurology, Queens Square in London. Currently he is a Research Assistant Professor at the Department of Neurology, the Feinberg School of Medicine, Northwestern University in Chicago.

About the research
Studying genes causing inherited dystonia has yielded important clues about why the neurons do not function properly in dystonia.
Myoclonus-dystonia (M-D) is a rare familial movement disorder characterized by a combination of myoclonus (jerky contraction of groups of muscles) and dystonia. Mutations in a gene called epsilon-sarcoglycan are found in about 30-50% of familial M-D cases, suggesting that mutations in other genes responsible for this condition are yet to be discovered.

To identify a novel genetic cause of M-D, I studied a large British family with many individuals affected with M-D, but without mutations in epsilon-sarcoglycan. Through the combination of different genetic techniques, I identified a mutation in a gene called KCTD17 as the only possibly disease-causing mutation.

A subsequent analysis of other familial M-D cases without a genetic diagnosis revealed the same mutation in a different family of German origin, confirming KCTD17 as a novel dystonia gene.

The precise function of KCTD17 is unknown, as is how the mutations actually cause dystonia.

KCTD17 is very abundant in the brain and in particular in the putamen, a brain region which is known to be critical in the neuronal circuits that are dysfunctional in dystonia patients.

Preliminary work to understand the function of KCTD17 showed that KCTD17 contributes to regulate (1) the effect of dopamine (one of the neurotransmitters critical in the development of dystonia) and (2) intracellular turnover of calcium (one of the most important signaling molecule in neurons).

Future studies are warranted to further characterize the molecular function and the interactors of KCTD17 as a step towards identifying new pharmacological targets to effectively treat dystonia.