A joint project between Dystonia Europe and NDF – the Norwegian Dystonia Association.

It was a great honour for the Norwegian Dystonia Association (NDF) to be co-organizer of this year’s D-DAYS conference in Oslo, the capital of Norway! Since Oslo is my childhood city, and has an important place in my heart, it was very special to me that the annual dystonia conference took place in my ‘home-town’.

I have participated at the D-DAYS conferences in Paris 2014, and in Rotterdam 2015. In my eyes these conferences were very well organized and with a high professional level. This year’s conference was no exception!

When NDF was asked to be a co-organizer of this year’s conference, we saw a unique opportunity to promote ourselves and to raise awareness of dystonia in Norway. During the conference, we highlighted some of our work. We had a separate stand with brochures, unfortunately only in Norwegian. We gave information about the projects we focus on. On the second day of the conference I presented a three-year physiotherapy project. Being a physiotherapist and also Chairwoman of NDF, it was a great honour to inform about the project that has been a great success!

Dystonia Europe (DE) has many years of experience in organising quality conferences.
Since last November there has been close contact between DE and NDF. The DE Board held a board meeting in Oslo where I joined to plan for the event. We discussed topics for the conference and suggested speakers. Together with DE and its large network, we were able to choose among top experts within the field of dystonia. The result was, in my point of view, a programme of very high quality. The programme was aimed at patients first of all but the medical profession was also invited to join. The first day of the conference focused on “Faces of dystonia” and “Future of dystonia”. On the second day there were presentations on “Managing dystonia”, “Physiotherapy and Rehabilitation” and “Coping strategies for Dystonia”. An abstract book, containing most presentations, can be found on the Dystonia Europe website: www.dystonia-europe.org.

The NDF Board participated actively during the D-Days conference. As Chairwoman of the association, I was proud to see this determination of our Board. Before the opening of the congress, we all helped with the packing of conference material and registering and welcoming participants. During the conference we made sure to be available to answer questions from participants, which contributed to a lot of good discussions, new connections with participants, speakers and partners as well as between our own members.

On Saturday afternoon, after the conference, Dystonia Europe delegates together with speakers and guests were invited to a sightseeing tour of Oslo. We were picked up by bus at the hotel. The first stop was at the Kontiki museum which is located at Bygdøy, a peninsula outside the city. The bus continued to the Vigeland sculpture park and to the ski jump arena at Holmenkollen. During the sightseeing several “Photo Shoots” under umbrellas in orange and blue, with logos of DE and NDF, were organised. The umbrella is the sign for the brain awareness campaign “Together under the umbrella” symbolizing that one in three people, is affected by a brain disease in his/her lifetime. On Sunday, April 10, this was celebrated with a “Together Under the Umbrella” event outside Østbanehallen in Oslo. Read more about the campaign on page   .
The Saturday sightseeing tour ended at the pride of Oslo: the spectacular Opera House. Here we were served a three course dinner in the restaurant overlooking the Oslofjord while the sun was setting. For all of us Norwegians, it was very special to see the appreciation and enthusiasm of our guests.

Thank you to the Board of DE who chose to organize this year’s event in the capital of Norway. Thank you for giving us the confidence to be co-host. It was an informative and eventful weekend with many memorable moments. Together we increased the understanding and knowledge of dystonia. 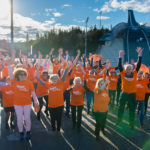 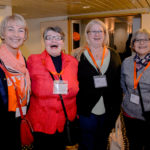 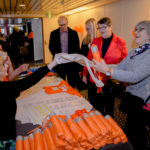 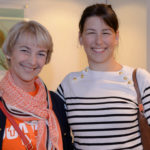 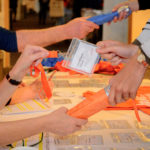 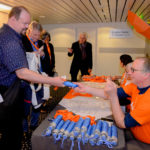 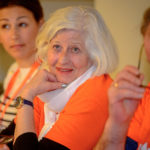 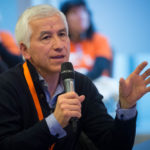 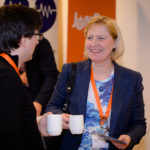 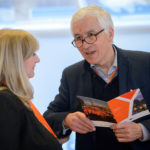 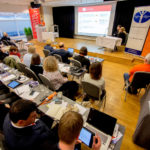 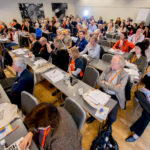 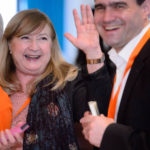 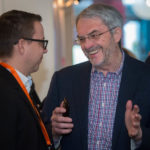 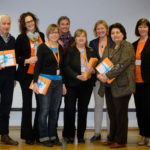 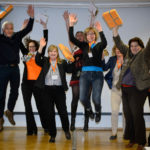 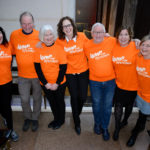 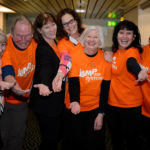 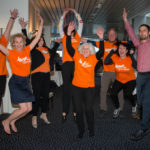 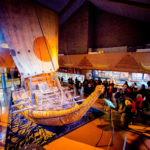 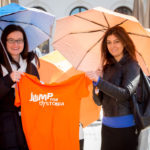 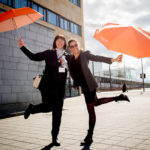