Last week the Dystonia Europe team of President Robert Scholten and Executive Director Monika Benson, met with St Jude Medical at their European Headquarters in Brussels. SJM is an American medical device company and has four major focus areas that include cardiac rhythm management, atrial fibrillation, cardiovascular and neuromodulation. Last year SJM received approval of its DBS (deep brain stimulation) system for the treatment of dystonia. Discussions focused on how to raise awareness of dystonia as well as physician education and awareness. And of course – the meeting ended with a JUMP FOR DYSTONIA! 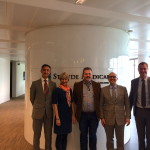 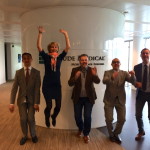