Dystonia Europe Board met in Amsterdam

A few weeks ago the DE Board gathered for the first meeting in 2014. President Robert Scholten welcomed everybody at the VanGogh Museum in Amsterdam, the Netherlands. The board meets only three times per year, and it’s always an intense week-end with a lot on the agenda. The next meeting will be held alongside the Movement Disorder Congress in Stockholm i June. 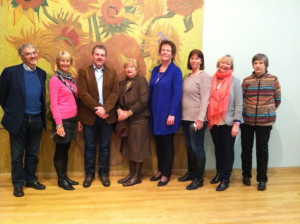