Cervical dystonia (CD) is the most common form of focal dystonia with adult onset. The symptoms usually start between the age of 30 and 50 and slowly progress during the first 5 years. Remission of symptoms occur in up to 10% of the patients. 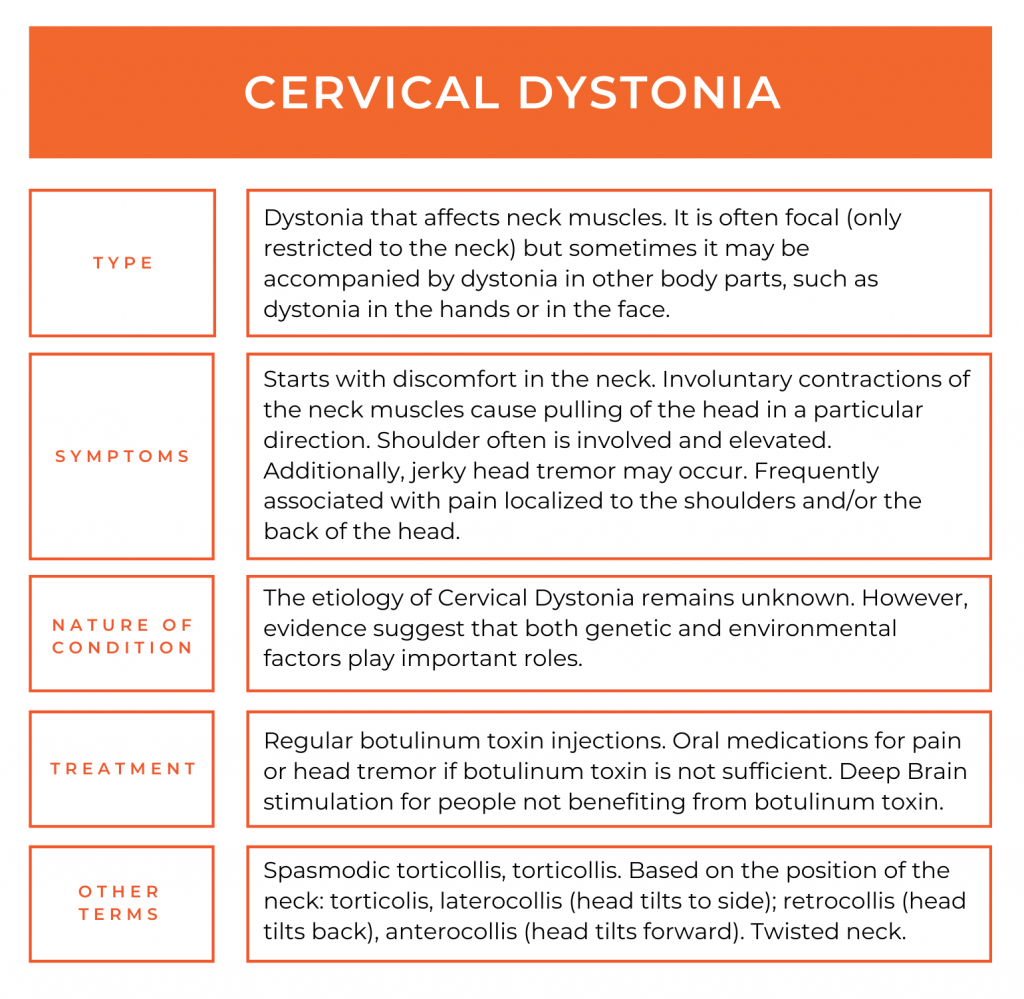 Cervical dystonia typically presents with involuntary, sustained muscle contractions. This leads to twisting of the of the head and neck sometimes along with jerky tremor which is very common. One of the typical features is the sensory trick (also known as geste antagoniste), i.e. touching one side of the face may relief the symptoms of dystonia. Pain is also a prominent and frequent feature of cervical dystonia. Sometimes, pain predates the onset of head pulling in people with cervical dystonia.

It has been hypothesized that cervical dystonia might be caused by a mis-communication between brain areas involved in the control of head posture. Yet, the exact brain mechanisms  determining cervical dystonia need to be elucidated.

Your doctor will ask about your medical history and in particular:

The doctor will also perform an examination of the affected body part(s). For some patients, blood tests or brain scanning may be recommended. However, such tests are likely to be normal.

Oral Medication – The most commonly used medications include: anticholinergics (e.g. Artane -trihexyphenidyl), benzodiazepines, baclofen, other muscle relaxants. Medications need to be monitored carefully when they are introduce in order to balance between the benefits and potential side effects (dry mouth, drowsiness, anxiety and difficulty urinating). They are used sometimes in association with botulinum toxin.

Deep Brain Stimulation (DBS). DBS treatment is reserved to those patients who, despite periodic injection with botulinum toxin, are still disabled and have poor quality of life due to cervical dystonia. For DBS surgery, two electrodes are commonly implanted in both sides in a deep structure of the brain named Globus Pallidus pars interna (GPi). Sometimes, other areas may be targeted by DBS for dystonia, such as the subthalamic nucleus (STN) and the thalamus (for patients with prominent head tremor).  These electrodes are connected to a stimulator that is implanted underneath the skin in the chest wall. This works as a brain pacemaker which emits electrical signals to help control muscle contractions. Only a few patients are eligible for this treatment, but they may gain great benefit. Side effects include those associated to the neurosurgical intervention (brain haemorrhage) or to the implanted device (brain infection, malfunctioning of the device). These side effects are extremely rare. Moreover, the DBS device needs periodic review by a neurologist expert in DBS who will adjust the settings to improve symptoms of cervical dystonia, while avoiding stimulation-induced side effects (muscle contractions, speech problems).