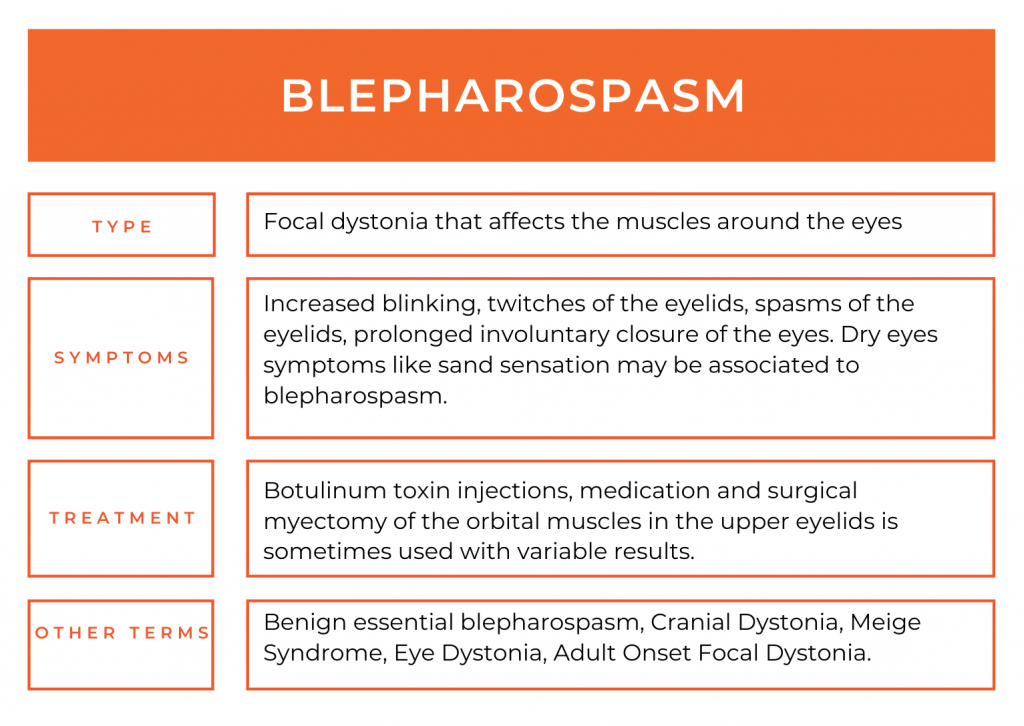 Blepharospasm typically affects both eyes and usually progress gradually. At onset, eye irritation symptoms may occur along with excessive blinking. In the early stages, symptoms may occur only under certain circumstances. Precipitating stressors include bright lights, emotional tension or fatigue. As the condition progresses, symptoms become more frequent and  progress over time to forceful and frequent contractures of the eyelids. In some cases, eyelids remain  forcefully closed causing functional blindness.

The exact cause of idiopathic blepharospasm is unknown. Some evidence using functional neuroimaging suggests dysfunction within the basal ganglia.

Blepharospasm may also occur as a symptom of the following conditions:

Diagnosis of blepharospasm is made clinically based on patient’s history and neurological examination. Neuroimaging is typically normal.

Botulinum Toxin – Periodic botulinum toxin injection into the eyelid muscles is one of the most effective treatments of blepharospasm and is considered a first line therapy.

Medication – Clonazepam, Lorazepam, and Trihexyphenidyl might be somewhat helpful in a few patients with blepharospasm. However, their side effects  (sleepiness, drowsiness, memory propblems) must be considered alongside their benefits.

Surgery – This is reserved for patients who poorly respond to botulinum toxin injections. Surgical myectomy of the orbital muscles in the upper eyelids is sometimes used with variable results. Deep brain stimulation is not considered for isolated blepharospasm, whereas severe cases of Meige Syndrome, not responsing to botulinum toxin, have been sometimes treated with DBS – Deep Brain Stimulation.